Have no more to do with man, for what is he worth? He is no more than the breath of his nostrils.?

?A myth is a theorem about the nature of reality, expressed not in algebraic symbols or inanimate abstractions but in animate narrative form.?

Robert Bringhurst, in Everywhere Being is Dancing

The Watchmen are a fraternity of superheroes. A member of this pantheon, The Comedian, is murdered. The Comedian bears a close resemblance to trickster gods Loki and Raven, as well as to the clown in Fellini’s La Strada?infuriating yet somehow holding the keys to the shadowy portals of life itself. His assassination is due in part to the fact that he knows too much. 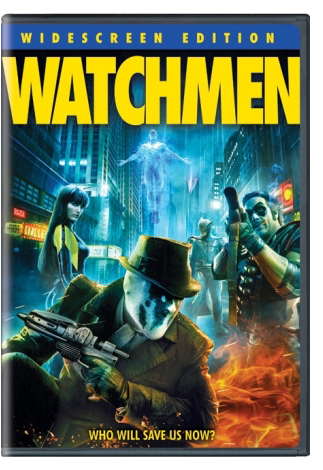 The Rotten Tomatoes consensus is that the flick was true to Alan Moore’s graphic novel but that those who haven’t read that book might have trouble getting through the narrative maze it presents.

I agree and disagree. The plot is dense, and It’s easy to miss key information. But this story and these characters?not so much in themselves as representatives of certain archetypes?are so tight with the overarching backstory of American superheroes that anyone with a smattering of culture, pop or other, should be able to find a healthy dollop of intellectual satisfaction in watching this. As I did, several times.

Rorschach undertakes to investigate and avenge the death of The Comedian. Rorschach is a deeply disturbed and violent man who aptly wears the imagery of his unconscious on his mask, or, as he calls it, his face, or his true self. (It is quite something to see the matching ink blots moving around on his white mask in response to the machinations of his psyche.) Jackie Earle Haley is spectacular in this role, clearly communicating an awesome power, a cryptic righteous wrath, and a painful awareness of his contemptible status in the eyes of the world.

Dr. Manhattan has brought Laurie Jupiter (Silk Spectre II) to Mars to give her a chance to talk him out of allowing the world to be destroyed. They are surveying the majestic, arid beauty of the barren planet, standing before a massive spiralling gold contraption that looks like a cross between a gyroscope and the inner workings of a Swiss watch. Dr. Manhattan argues that life has added nothing to the universe and will not be missed following the pending cataclysm.

In a moment of deep psychic interchange Dr. Manhattan and Laurie Jupiter receive a simultaneous revelation that jars her to her soul but which suddenly convinces Dr. Manhattan that life is marvellous, that he loves it, and that it is worth saving after all. As the most powerful being in this universe achieves enlightenment, Laurie Jupiter smashes the great clockwork edifice and weeps as it falls in shards around her.

The alternate America that the story unravels is not so different from the America we’ve known, but that tends to be the way with myths; this is the way things would be if the gods walked among us, in other words. Much like America seen from the imagination of an introverted adolescent comics buff.

This is the story of the drawn-out historical heartbreak, both real and mythological, that changed the course of the superhero, both true and figurative, from a simple battle of good against evil to a rich and bloody tapestry of unconscious urges and the disturbing awareness that, in Walt Kelly’s words, we have met the enemy and he is us.

Who cares if the film lacks structure? If you learn anything from Watchmen, It’s that structure is highly overrated.

Watchmen manifests seven of The Mindful Bard’s criteria for films well worth seeing: 1) it is authentic, original, and delightful; 2) it confronts existing injustices; 3) it displays an engagement with and compassionate response to suffering; 4) it inspires an awareness of the sanctity of creation; 5) it is about attainment of the true self; 6) it stimulates my mind; and 7) it poses and admirably responds to questions having a direct bearing on my view of existence.