What has two legs and flies?

If I can possibly help it, the answer is ?Not me.? As far as I’m concerned, the age of air travel is officially over. It’s just not fun anymore.

It starts when you walk in the airport and see the line stretching across the terminal. You notice that the one ticketing agent is processing one passenger every five minutes. At this rate, the plane will have arrived at its final destination before you even get to security. That’s when the agent goes on coffee break, leaving no replacement.

Even when the line starts moving, It’s a hassle. For every step, you pick up your suitcases, your kid’s bags, and all your carry-ons, move up two feet, and then put everything back down. Again. And again. And again.

That’s one of the biggest problems with flying: the bags. Stringent airline baggage restrictions and fees cause immense stress while packing (will this extra sweater put the suitcase over the limit?) and, especially, at the ticket counter, where you devoutly hope and pray the agent won’t notice that the sweater (and the hair dryer and the book) in fact did put the suitcase several pounds over. (She doesn’t.)

Then, because You’re being charged for every bag you check, you decide to max out your allowable carry-on bags because It’s free, and you still haven’t learned that free is not always best. Both you and your child, age three, are allowed one carry-on and one personal item. Since a three-year-old can’t (or won’t, I’m not sure which) drag her own bags through the airport, it falls on you, of course. So you head to security, carrying umpteen bags which weigh more than you do.

Do you need all those bags? My husband always challenges this. And the answer is always, ?Are you crazy? Of course I do!? For example, one bag is usually crammed with meals and snacks. And I do need it. One day, tired of arguing with my husband over the food question, I capitulated. I was flying alone with my then two-year-old from Washington, DC, to Alaska, and I had a two-and-a-half hour layover in a sizeable airport. I brought our lunch but not our supper; we’d ?live a little? this time and get dinner out.

Uh-uh. Our plane was delayed for over two hours on the tarmac due to a tornado-spawning storm that rolled through just before takeoff. Our plane in our layover airport was almost finished boarding by the time we rushed up to the gate, bags and strollers flying. I dug a forgotten energy bar out of my purse as sustenance for the six-and-a-half hour flight north. My daughter got Cheerios. From then on, bags of food were a must! 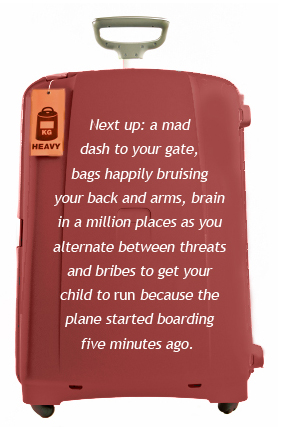 Another bag has activities and books for the plane. As a rule, kids mostly enjoy climbing on the seats and annoying the passengers around them, but what if you end up needing those books and crayons and don’t have them? The longer the flight, the larger the books, the heavier the bag . . . and the bigger the chiropractor’s bill.

And That’s not all. There’s always your purse, and a coat if It’s cold, and the carry-on filled with whatever you had to bring but couldn’t squeeze into your already overstuffed and overweight suitcase. And then there’s usually a tote bag filled with travel necessities, like the multiple changes of clothes to be used in the event that your potty-trained preschooler stands in the restroom stall and deliberately wets herself because She’s too afraid of the automatic flushers to use the toilets.

I can’t forget my pharmacy-in-a-bag. Because of my daughter’s allergies and asthma, I can’t travel anywhere without a duffle bag full of her regular meds, emergency breathing treatments, and a seven-pound nebulizer. The weight’s bad enough, but the bag is also a security nightmare: It’s full of liquid medications and a nebulizer that looks like a bomb. They have to set it up and run it before they’ll let me through, which means a long holdup.

Speaking of security, the only thing worse than being at the back of a long line at the checkpoint is feeling the evil stares behind you while you hold up a long line at the front. This happened frequently when my daughter was a baby. But what did people expect me to do? I couldn’t collapse the stroller with one hand, regardless of what the directions claimed. And I flat-out wouldn’t put my nine-month-old on the conveyer belt while I removed my shoes with one hand, put our bags in the bins with the other, held our travel documents in my teeth, and somehow collapsed the stroller using my knees.

You finally pass security. Next up: a mad dash to your gate, bags happily bruising your back and arms, brain in a million places as you alternate between threats and bribes to get your child to run because the plane started boarding five minutes ago. Not that being late for boarding matters, since ?special needs passengers? apparently no longer covers parents with young, unruly charges bumping Santa Claus sacks of stuff down narrow airplane aisles.

Once You’re on the plane and ready for takeoff, forget about relaxing. Do you get bored while sitting for hours in a cramped space, where your only burst of freedom is a marathon between gates at layovers? I do, but I can deal. My daughter can’t.

I’m glad She’s finally old enough to do some quiet activities, though. When she was nine months old, we flew from Alaska to Toronto. Twelve glorious hours of travelling, in which nothing held her interest for more than two minutes. Nothing, that is, except the opportunity to crawl up and down the filthy aisle for hours. My reputation as a good mom was destroyed beyond repair. So, by the way, was her outfit.

That reminds me of the best piece of advice I ever heard for flying with kids: dress them cute. That way, when they inevitably crack, people will see the sweet outfit and the twisted, screaming face and think that, on the average, your kid is normal.

At last, your child is engrossed in a book, and you decide to close your eyes for those precious five minutes you have before she starts whining to get off the plane. That’s when the beverage service starts. Everyone traditionally complains about airline food, but I fondly recall the days when you actually got served reheated leftovers. Nowadays, You’re lucky to get a beverage. The amount depends on the airline: some are required to measure it out by teaspoonfuls into a cup crammed with ice. don’t think you can fool me with your high-flying application of the Archimedes? principle! I know that ice leaves less room in the cup for my drink. Then there are some who are quite free with the beverage service, giving you the whole can (and slipping me an extra one because they realize how badly mom needs caffeine). So I’m not sure what to think.

I do wish they wouldn’t start the beverages so early, though. On a four-hour flight, you get thirsty midway through, not in the first 15 minutes. By three-and-a-half hours, You’re dying. And serving drinks early on a long flight means the longer you need to, well, you know, unless you want to use the tiny closet at the back of the airplane. Adults can be reasoned with. But try explaining to a preschooler that she can’t drink her entire apple juice in one gulp because you only brought two changes of clothes for her and she already ruined one two hours ago. 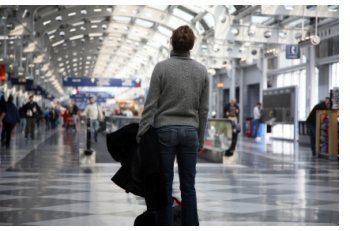 As for the airline snacks, I usually decline them since I already pack my own food. Even if I liked mouldy peanuts, I’d refuse them so that I didn’t have to spill peanut dust into the air, to be breathed in by my peanut-allergic daughter sitting next to me. This is something I really don’t understand. Kids can’t bring peanut butter?sticky peanut butter that doesn’t fall off the bread and roll around under the seats as an attraction to bored kids?to a huge school, but peanuts are freely served on a closed-in, tiny aircraft, where passengers pay $500 for the pleasure of breathing peanut pollution for a four-hour flight. Oh, and first class isn’t much better: instead of mouldy peanuts, you get mouldy almonds. And my daughter’s allergic to those, too.

When the flight is finally over, and you’ve spent 20 minutes standing in line waiting to get off the plane, bags in hand and child on the aisle floor wound around your shoes trying to drag you down, you plod toward baggage claim. There, you watch in vain as the roundabout delivers 50 black suitcases identical to yours. Naturally, your bags aren’t among them.

If You’re very unlucky, You’re flying into an airport where baggage claim is inside the secure part of the terminal. When you finally do get your suitcases, which were in a different spot because they were rerouted through Utah for some reason, you add two 50-pound suitcases to your already ridiculously heavy load.

Reflecting on how you really, really need to fix the broken wheel on that one bag, you drag your burdens like an exhausted pack horse toward the main terminal. There, the party meeting you greets you with happy smiles: ?So, did you have a good flight??