Columns
The Voice
The Mindful Bard – The Ballad of Stompin? Tom

?Then came Sudbury Saturday night, at the Gumboot Cloggeroo
They made me the Chairman of the Board, ?til I stomped a hole right thru
And like ol? Luke with his old guitar, my ?Song wasn’t over yet?
Till I sang the Ode that I wrote for The Road and the Mom I can’t forget.?

When Tom Connors was a little boy growing up in St. John, New Brunswick, he had to wait outside while his friends were called in to supper. He had no supper to go to, and it never occurred to any of these parents that this lone child could use a meal.

A few years later Tom accompanied his destitute young mother as she hitchhiked through Nova Scotia to try to get help from relatives. The relatives in question punctuated the long ordeal with a slammed door.

Soon the authorities were called, and instead of helping the poor woman house and feed herself and her child they incarcerated her and sent Tom to an orphanage.

The wonder is that in spite of all that (and much more) Tom became such a loving person. In fact, he dedicated his life to singing tributes to the places and people he visited, heard about, or just plain admired. If anyone could be expected to produce music That’s dark, moody, and rails against society, It’s this guy, who suffered unimaginable privations at the hands of neighbours, family, strangers, and the system. 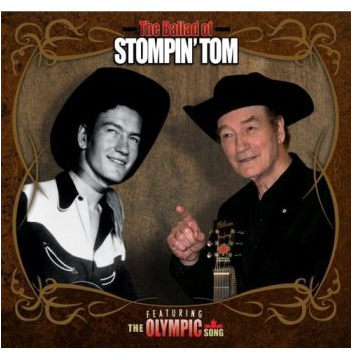 It seems that Tom met enough decent, caring, generous human beings in his travels to turn his rig around. If it hadn’t been for these people there would be no Stompin? Tom.

Once, while hitchhiking across country as a young man, not long after telling off an evangelical Christian who Tom felt was trying to shove religion down his throat, Tom had a spiritual experience. He made a kind of covenant with his maker: if God wanted him to give his life to music and was willing to make it happen, then, by Ned, Tom was ready to surrender. This experience granted him not only a firmness of resolve but also a sense of peace about the miseries to which his fellow humans had subjected him.

After he became famous Tom not only treated his enemies with kindness, he defended the underdog and stood by his principles, often at his own personal expense. He advocated tirelessly for Canadian musicians even when this meant earning the ire of several national organizations.

Tom Connors is the product of an era that wasn’t exactly searching for a Canadian identity. But his music is as close as any to a typically Canadian musical genre, the music of all sorts of ordinary folks in kitchens, on farms, on fishing boats, on mountains and plains, in mines and fields and forests, in hockey rinks, in prisons, taverns, churches, and living on the streets.

If Tom had one lesson to teach this big sprawling land, what would it be? Being Canadian is about calling greed and injustice when you see ?em. It’s also about forgiveness. And about folks. Lots and lots of different folks.

If you look long and hard enough, you’ll always find some good ones.

The Ballad of Stompin? Tom manifests five of The Mindful Bard’s criteria for music well worth a listen: 1) it is authentic, original, and delightful; 2) it confronts, rebukes, and mocks existing injustices; 3) it displays an engagement with and compassionate response to suffering; 4) it inspires an awareness of the sanctity of creation; and 5) it harmoniously unites art with social action, saving me from both seclusion in an ivory tower and slavery to someone else’s political agenda.

In Conversation—with Jane in Space