Articles
The Voice
In Conversation With . . . Giant Hand

Giant Hand is Kirk Ramsay, an impetuous young dude with no musical background who one day decided to start making music anyway. He enjoyed a surprisingly immediate?and positive?response from listening audiences. Recently Kirk made both the cover of Ottawa Magazine and the ?Hottest Bands in Canada? list. See Voice review of his debut album, Coming Home.

I decided to make music after watching a documentary about Daniel Johnston. I just got this huge urge to make music. I’d always wanted to be in a band, but after watching the documentary I decided to do it on my own. About two or three months after getting my first guitar I was opening for Immaculate Machine, then, about a month after that, Born Ruffians. A few months later I was somehow playing at Ottawa’s Bluesfest.

I never really had a chance to sit down and figure out what happened, but I just keep writing music and playing shows and taking it slow. I recorded a full-length album in my apartment. After I’d recorded a few songs I realized a concept album was taking shape. Now It’s almost been two years, and I’m still having a good time. 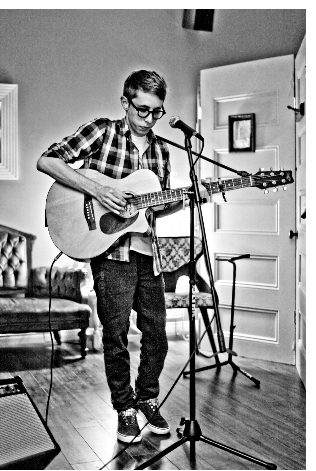 Before, I didn’t have an outlet for any of my thoughts. I kind of just thought about them all the time but That’s it. Those thoughts never went anywhere. Now they do.

The Great Gatsby by F. Scott Fitzgerald, and Daniel Johnston’s album, Hi, How Are You.