A ?Hollywood ending? seems synonymous with the world of film. Everything works out, all parties are satisfied, and the credits roll with a happily ever after. But It’s truly ?just a movie.? Ironically, many old movies about Hollywood?particularly the more enduring ones?don’t share a similar optimism. Themes of jealousy, self-promotion, denial, and despair suggest a less sunny outlook than the common image of Hollywood brings forth. In this week’s instalment, we’ll look at several old films that deal with some of the trials and tribulations of old-time ?stars??actors, directors, producers, and film bosses?for some perspective on how the show business industry viewed itself.

1954’s A Star is Born encompasses all sides of the Hollywood experience: wide-eyed wonder at the newness of Hollywood and the excitement of seeing one’s star rising are juxtaposed with the emptiness of a failing career, alcoholism, and despair. Judy Garland plays Esther, a young singer who’s discovered by unpredictable actor Norman Maine. As Esther’s fame grows, the two fall in love and marry. But life takes a downward turn; Norman is released from his studio contract because his alcoholism and unpredictable ways become too big a risk for producers, and his downward spiral begins as Esther’s star rises.

Trivia: In a stroke of irony, in the few years prior to A Star is Born, Judy Garland’s career had been experiencing a decline similar to that of Norman. In the late 1940s, she had been dropped from several pictures due to unreliability and drug and alcohol addiction, culminating in the suspension of her MGM contract in 1950. A Star is Born was seen as a comeback vehicle for Garland (and its showcasing of her voice and dance talent certainly suggests this).

A more macabre take on decaying careers is 1950’s film noir Sunset Boulevard. Out-of-work screenwriter Joe Gillis, fleeing his creditors, seeks shelter at an apparently abandoned mansion on Sunset Blvd. But It’s no empty house: It’s inhabited by tragically disturbed former silent screen star Norma Desmond. Desmond ensnares Gillis first into her plan to make a ?comeback? in Hollywood, then into a romantic tragedy that most screenwriters could only dream of writing.

Trivia: In an attempt to make the story more realistic, the directors turned to real life for character casting. Norma Desmond is played by Gloria Swanson, a film star from the silent era. Her butler, Max, is played by an actor who directed Swanson in the 1920s. Legendary director Cecil B. DeMille (director of The Ten Commandments) plays himself, as does Hollywood gossip columnist Hedda Hopper.

In a similar vein, What Ever Happened to Baby Jane (1962), which I reviewed earlier in the Horror Movies series last October, deals with an aging actress unable to come to terms with her long-decayed career. A former vaudeville star and later somewhat successful screen actress, Jane Hudson is consumed by jealousy for the career of her now-infirm sister; denial of her non-existent popularity; and desperation to be loved once more. Creepier than Sunset Boulevard, this film is more horror than noir, but seems to carry a similar warning to grow old gracefully. 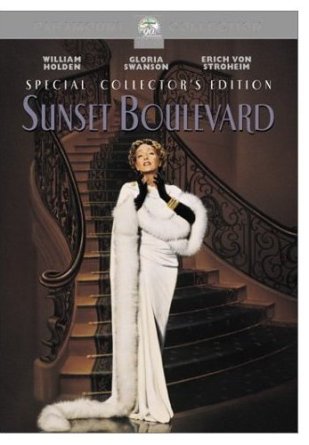 Trivia: Joan Crawford, the widow of Pepsi-Cola’s former CEO and a member of its board of directors, managed to get Pepsi product placement into most of her films. Baby Jane is no exception; in the movie’s final scenes, a beachgoer attempts to collect the deposit on empty Pepsi cans.

1950’s All About Eve deals with stage rather than film actors, but its intriguing story similarly underlines the fleeting nature of stardom. Margo Channing is a Broadway star at the height of her career when she meets a young fan, Eve. Impressed by the girl’s devotion and skill, she eventually hires her as an assistant. But Eve has a hidden agenda: through blackmail, sabotage, and trickery, she works to build her own career at the expense of Channing?s. Eve triumphs, indeed, but the film’s ironic final scenes suggest that in show business, career stability can never be taken for granted.

It’s the director who’s the manipulator in 1952’s The Bad and the Beautiful. When an actress, director, and screenwriter receive a call from a former colleague, Jonathan Shields, they react negatively. But on the insistence of Shields’s producer, they gather together and begin to reminisce on just why Shields’s name fills them with such anger. As a young director under the shadow of his unpopular, recently deceased filmmaker father, Shields was determined to make it in Hollywood no matter what the cost. Among the human cost: the hearts and spirits of the three stars sitting in his producer’s office. Yet, in a twist of irony, his thoughtless actions eventually resulted in wildly successful careers for all three. At the end of the recollections, the stars? feelings haven’t changed; yet, ever eager for another break, they betray curiosity over his latest offer.

Trivia: Lana Turner, who plays actress Georgia Lorrison, got her big break in a manner worthy of a Hollywood happily-ever-after. As a high school student, she skipped class one day; while stopping for a soft drink in a café, she was noticed by the publisher of one of the big film industry trade publications, and referred to a talent agency. She starred in her first film several months later.

Not all old showbiz movies were disheartening, though. Singin? in the Rain (1952) is an upbeat musical that treats the ups and downs of stardom with a lighter hand. Don Lockwood and Lina Lamont are successful silent film actors whose attempt to make the difficult transition to talking pictures is played out against a romantic triangle on the studio lot. Lina wants Don, but he’s less interested in the shallow leading lady than in a talented chorus girl, Kathy. Tensions run high when Lockwood and Lamont begin filming their first talking picture. Lina’s voice records terribly, and It’s suggested that Kathy’s voice be dubbed in. However, Lina, fiercely jealous of Kathy’s rising talent and Don’s interest in her, attempts to sabotage both. She convinces studio executives to require Kathy to continue voicing her lines without film credit, but She’s no match for the quick thinking of Lockwood, Kathy, and their friends. 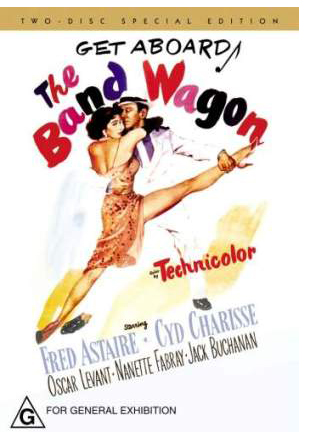 Trivia: The ?rainwater? during the movie’s famous ?Singin? in the Rain? song and dance routine was actually mixed with a small amount of milk so that it would film more easily. During the filming of the scene, Gene Kelly (who plays actor Lockwood) was ill with a 103-degree fever, but still filmed the routine in a single take.

Another musical, The Band Wagon (1953), follows a down-on-his-luck film star who signs on to a Broadway play helmed by a somewhat fanatical director. The play had potential, but the director’s macabre bent and overindulgence of special effects create a flop. The actors, screenwriters, and stagehands decide to continue the tour, but remake the show as a lighthearted comedy. Singing, dance numbers, and romantic tension follow the players on their journey through showmaking.

Trivia: In the ?Triplets? dance number, the three actors were actually dancing on their knees. Nanette Fabray, who played Lily, later said it was so painful that she had to take pain pills to get through the routine.

Finally, Mel Brooks’s comedy The Producers (1968) brings the show business story to hilarious heights. Max Bialystock, a shady producer, and his accountant Bloom hit upon a get-rich-quick scheme: they’ll oversell shares in a future Broadway play, produce a complete flop, and flee with the cash before the auditors catch up. They have the perfect script, written by a crazed former Nazi who’s playing tribute to Hitler. It’s a guaranteed failure. Imagine the schemers? horror when the show is seen as a comical farce?and brings in record profits!

Trivia: Initially, Dustin Hoffman was cast as the playwright. However, the night before shooting began, he left production in order to film The Graduate (which, ironically, co-starred Mel Brooks’s wife, Anne Bancroft).

Next month, in honour of Valentine’s Day, we’ll look at something a little more happily-ever-after: sweeping romantic dramas and hilarious romantic comedies. In the meantime, enjoy these tales of old Hollywood and Broadway show people. Happy watching!