Articles
The Voice
In Conversation With . . . Jan Wouter Oostenrijk

Jan Wouter Oostenrijk is a Dutch guitar wizard who has contributed significantly to the current crossover between jazz and the music of the Maghreb region, a fusion he calls Maghreb Jazz. (Be sure to read the profile of Jan in Maghreb Voices, in this issue of The Voice.)

Recently he took the time to talk with Wanda Waterman St. Louis about the Maghreb, crossovers, and integration (ethnic and musical).

I grew up in Groningen, one of the nicest cities in Holland, a town with an active music scene and a beautiful countryside.

I come from a very musical family, mainly classically oriented. My parents play music and both of my sisters are professional musicians (oboe and voice). At around the age of six I started studying the flute at school. Later on I took up classical guitar. Then I started to play in bands, which was a much more autodidactic and exploratory experience.

I was a sweet kid until I turned 13, when I became a pain-in-the-ass teenager. I exchanged classical guitar and flute for the electric guitar and wah-wah pedal and started playing in punk and new wave bands. After a few years of destructiveness and resistance I discovered, at around the age of 18, that It’s all about working hard and smart if you want to achieve anything. I still believe that.

After my punk and new wave period I became more interested in improvisatory styles like jazz and blues. At 22 I began studying jazz guitar at conservatories, first in Groningen and then in Amsterdam.

Living and studying in Amsterdam allowed me to meet Moroccan immigrant musicians and to become connected with the world music scene (on YouTube you can find videos of this period under the name Railand Band). 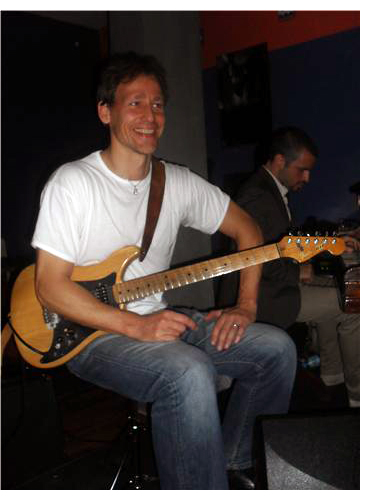 I studied the North African Arab language for several years and also took lessons in Arab melody (maqam playing). But mostly I learned by performing, travelling, and trusting my own experiences. My favourite musical genre from the Maghreb is folkloric chaabi music. The rhythms are so hypnotic, danceable, and spicy, with quarter tones in the melodies.

I’ve travelled to the Maghreb region about 15 times, on visits varying in length from one week to two months. Usually It’s Morocco. When we perform there people stay the whole day to watch us set up the stage and do the sound checks, waiting on the street and following every step.

Sometimes I feel we’re a little spoiled in the Western world because there are so many cultural events offered every day. It seems as if people take music for granted. In Africa people are so warm, happy, and enthusiastic when you play.

I like to be inspired and challenged. Inspiration can come from people, cultures, music, or languages. I absorb it all and make it my own. My creativity takes the form of playing with the ingredients and placing them in a new order or context.

I’ve had different obsessions every five years. As a kid it was Vivaldi’s Four Seasons and science fiction novels and as a teenager The Cure (early) and Iggy Pop. As a jazz student my heroes were Wes Montgomery, Miles Davis, John Coltrane, Joe Pass, Robben Ford, and Joe Zawinul.

In North African and Arab music I’m inspired by Cheb Khaled, Orchestre National de Barbes, Karim Ziad, Um Kalthoum, and Munir Bashir. I have many other favourites in the pop, rock, and blues world like AC/DC and B.B. King. I’ve explored nearly all musical styles and periods.

Social conscience is my main motivation in life, besides being a good guitar player. My music is all about how to absorb another culture without losing yourself. I like the idea that when you listen to my music you forget this whole idea of the clash of civilizations between the Arab world and the West. Like jazz it also overcomes racial issues.

I believe love and positive energy are bigger than everything else.

Lately I’ve been concentrating on developing a new crossover. I call it ?Sharqi Blues.? So I’ve been listening to a lot to Egyptian belly dance music. In the coming months I’ll be working the demos and bringing out some new material.