? . . . I discovered that mixing my jazz background with northern African music provided a great opportunity for new musical crossovers. I had already been inspired by innovative musicians like Joe Zawinul and Miles Davis. I also felt there was a social need for this new music because of the incredible amount of misunderstanding between the West and the Arab world.?

There will always be music fans that will complain about the mixing of genres, quickly resigning musical syncretism to the realm of lesser music, music of questionable quality insofar as it represents a collage of musical styles and languages.

Trouble is, you can’t study the history of any serious musical genre, particularly the history of jazz, without coming up against the insurmountable fact of its mixed cultural origins.

Dutch guitarist Jan Wouter Oostenrijk is keenly aware of the creative stimulus afforded by musical crossovers. With degrees in both classical and jazz guitar (he’s also studied flamenco music and Arabic melody) and with the support of an amazing band of conservatory-trained virtuosos and brilliant self-taught Moroccan immigrants to the Netherlands, Oostenrijk has been weaving northern African music into his jazz performances for years, creating a rich and spicy gumbo that remains steadfastly true to the jazz tradition.

It hasn’t always been an easy fit:

?Incorporating Maghreb sounds into the musical context of jazz is a never-ending puzzle,? says Jan. ?It’s like integration itself?finding ways to meet and seeing what works and what doesn’t. It’s like learning a new language.?

He isn’t the first jazz man to have been inspired by Maghreb music. African music is a well-known precursor to American jazz, and the great jazz composers and musicians, including Ellington, Gillespie, and Davis (versions of whose Arab-influenced tunes Jan has ingeniously included on Maghreb Jazz Guitar) often returned to this geographical fountainhead of their inspiration when their muses urged them to explore new directions.

Oostenrijk brings a different understanding to Maghreb music than did the older composers, one based on his personal experiences playing with Moroccan 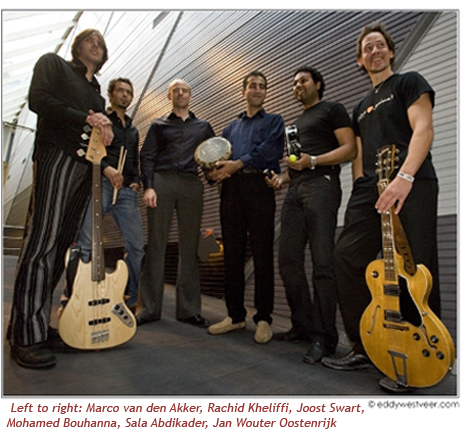 musicians in Holland. Especially notable in his music is the amazing range of contrapuntal rhythms on each track and the Middle Eastern modes that he works into his improvisations.

Jan also sings traditional Arabic songs in a rich, throaty, fervent voice. His own Arabic composition, ?L Blaed I Musiqya,? is an engaging and delightful tribute to the lands and the peoples that inspire his creative work.

It’s always good to meet a genius who doesn’t take himself too seriously. While I was interviewing Jan I asked him to list the different instruments played on Maghreb Jazz Guitar, those not specifically named on the CD jacket. He named the cracab (Gnawa castanets), the duff (Arab hand drum), the bendir (Arab hand drum with an inner snare), the tar (Middle East tambourine), and the darbuka (Egyptian tabla).

I asked him about the sintir (the Gnawan three-stringed lute) I had distinctly heard on a number of tracks. He kept insisting that there was no sintir on the CD, but offered no explanation as to what I might have heard.

Eventually I figured out that he had brilliantly synthesized the sound of the sintir on his guitar with an e-bow, a clever little gadget which in the right hands can ape a host of instruments. Including the sintir. When I called him on it in an email he sent back a little winky face icon. He’d had his fun.

Currently Oostenrijk is developing a new musical crossover he calls ?Sharqi Blues,? based on Egyptian belly dancing music. Look forward to some exciting new recordings (and performances) in the near future.

Maghreb Voices celebrates the art and culture of the people of Algeria, Morocco, and Tunisia, in northern Africa. This column features profiles of artists, musicians, and writers who are 1) living within a Maghreb country, 2) originally from the Maghreb and are now using the culture of their homeland as inspiration in their art, and 3) come from outside the Maghreb but have based their art largely on the cultures of the Maghreb. Because French is the most common European language spoken in much of the region, many interviews will appear here in French.

If you discover any books, compact disks, or films which came out in the last twelve months and which you think fit the above criteria, please drop a line to bard@voicemagazine.org. If I agree with your recommendation, I’ll thank you online.