Articles
The Voice
In Conversation With . . . Gordie Tentrees

Gordie Tentrees is a roots-influenced singer-songwriter with a penchant for gritty, feel-good hymns to love, restlessness, and the pure religion of the open road. His latest CD, Mercy or Sin, is a rich stew of poetry and blues minstrelsy (see Voice review here).

Recently Gordie took the time to chat with Wanda Waterman St. Louis about mentors, creativity, and believing in oneself.

I grew up in Southern Ontario in a little farming town called Bancroft. I was raised by a hippie goat farmer and a moonshine-making redneck entrepreneur. I grew up playing sports a lot. I listened to CBC radio and my mother playing folk songs and the flute around the house. There were a lot of artists in my small town, so music was all around though I didn’t take any interest in it until my early twenties.

I had virtually no musical education. I picked up my first guitar when I was 24, after moving to the Yukon. I went to an open stage and decided I’d better write some songs because I didn’t know any; then I became addicted, adding dobro and harmonica into the mix. I took lessons of various sorts from other Yukon artists who kindly took me under their wings. I probably wouldn’t be where I am if music weren’t such a big part of the community in the Yukon here and it wasn’t so supportive of people like myself.

My favourite musical experience was getting invited to open for my favourite songwriter, Fred Eaglesmith, in Europe and the UK. We got to spend 30 days together and it was a dream to do that. I thought, If nothing ever comes of this after I don’t care, it does not get any better. What a great guy.

I write what I know. Most of It’s personal. I’ve had the privilege of experiencing some difficult, drama-filled experiences, all of which I seem to capture and let go in song. Not all of them are heavy; even the lighthearted ones are mostly things I’ve experienced and can connect with. 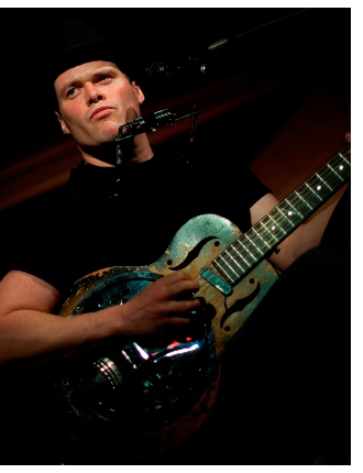 When an idea is starting to come together I try to just let out words and thoughts as they come, not analyze what’s happening. I edit stuff later. I just get it out and down on paper. I never give up on an idea or lyric or throw it away; you never know when it’ll come in handy down the road. I’ve written songs in three minutes or taken as long as five years to finish them. Each song seems to have its own process and That’s what I enjoy the most about songwriting.

As a kid I was always told to believe in myself before anything else. That seems to have stuck with me.

I’ve listened to 17 Fred Eaglesmith albums I bet two thousand times. I grew up hearing Fred, Rick Fines, Willie P. Bennett, Ray Bonneville, and Washboard Hank. I listen to a lot of old blues and old country, and lately my favourite songwriters have been Sam Baker and Adam Carroll.

I was first attracted to blues and country music because of the story songs and the realness, along with the dynamic instruments and groove-based sound that could be done in a simple way yet contain so much. With blues I like the about-to-fall-apart-barely-hanging-on interpretation you can give it.

On the Road, Again?

we’re now on a 50-date US tour and headed for an Olympic Games appearance and a big summer festival season as well as tours in Germany, Holland, and the UK. I’m looking forward to taking the new album out on the road.

The musician’s life has made me appreciate the quiet moments at home a little more. I feel really lucky these days. I get to travel and play my music, period. I appreciate that people let me play my songs.