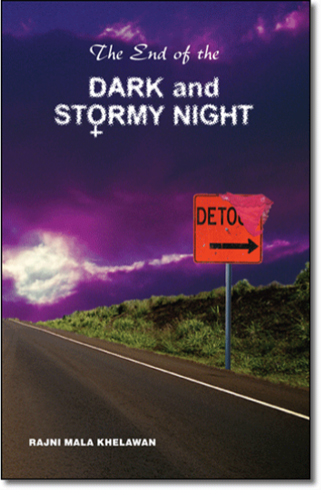 If there’s one word to describe this debut novel by Rajni Mala Khelawan, It’s contrast.

In Elkford, BC, Ravi Anand is a young man struggling to become a writer, and he’s wrestling mightily with the first lines of his novel: ?It was a dark and stormy night . . .?

His wife, Jesse, isn’t much help. She’s tired of supporting Ravi?and tired of being the ?red-haired cow-eater? in the eyes of his disapproving mother.

Mrs. Anand remains stubbornly blinded by her own narrow beliefs, (still clinging to the hope of ?a virgin bride from India for her son?), but She’s not the only Elkfordian living in darkness.

Elisha Hicks longs to be with her lesbian lover but pretends to be straight, too ashamed to ?take off the blinding glasses she put on the eyes of the world.?

To Khelawan’s credit, she imbues these characters with refreshing honesty. they’re colourful, multifaceted, and at times outrageously funny. Mrs. Anand may be a racist, controlling mother, but when she gets her hands on Mr. Anand (fed Viagra in the guise of a diabetes cure), the earthy sex scene reveals her as an emotionally complex woman with much more depth than simply a stock character.

The ideas here are complex too, and well worth exploring, but That’s where another contrast comes in?the writing just isn’t as well developed as the concepts. The biggest trap Khelawan falls into is one that plagues many writers: telling, not showing. Despite the rich layers waiting to be explored, the prose often moves stiffly. For example, when Ravi meets a stranger in a nearby town, there’s a certain energy missing: ?He wished Ravi and his friends a nice vacation in Cowley as he adjusted the cap on his head. He invited them to come down and visit him at the Sawmill. He suggested that they might learn something.?

The dialogue seems oddly uneven as well. The main characters are young, middle-class Canadians and in many places their speech feels real. When Ravi says ?Jeez Mom, It’s not like the only time I phone you is when I need money,? it rings true. But too often, the dialogue reads like the passage above?awkward enough to feel as though You’re peering behind the curtain and watching the actors practice their lines.

There’s potential here, and lots of it, and it will be interesting to see how Khelawan’s talent develops in her second novel (according to the author’s bio, She’s working on it now).

Like several of the characters in this debut novel, the reader often gets a glimpse of something wonderful just out of sight around the bend. With a little more time spent perfecting her craft, Khelawan may just show readers what’s on the other side of that curve.