With Valentine’s Day coming up this weekend, theatres are brimming with light romantic comedies. But It’s not necessary to head to the cinema to create the appropriate atmosphere. A classic romantic comedy?with a bowl of popcorn and a comfortable couch, of course?makes for a fantastic date night. In the next two instalments of ?Old Movies,? we’ll review, in chronological order, a few old romantic comedies that are as enjoyable today as they were decades ago (and perhaps more!)

1934’s It Happened One Night is equal parts romance and comedy. Spoiled rich girl Ellie runs off with a gold-digging playboy of whom her father disapproves. Although her father catches the couple before they’ve consummated the marriage, Ellie refuses to be ordered around and escapes, determined to reach her husband.

Partway through her travels, however, She’s recognized by Peter, a recently fired reporter (another delightful rogue played by Clark Gable). He realizes his opportunity to turn his luck around, and makes Ellie a deal: either she gives him the exclusive story on her incognito travel, or he’ll turn her in. As their adventures unfold, Ellie begins to fall in love with the reporter?but is it mutual?

Trivia: It Happened One Night lifted Columbia Pictures from its second-rate, more obscure status to become one of the major contenders among Hollywood studios. Before production, Clark Gable was loaned to Columbia by MGM for the film as ?punishment? for his off-screen antics. It was an ironic move, as Gable’s role in this film garnered him his only Oscar win.

Divisions of social class were also a theme in My Man Godfrey (1936). Socialite Irene meets out-of-work, homeless fellow Godfrey and insists on bringing him home as her ?protégé.? He becomes the family’s new butler, and although he’s content to remain in that position, Irene is dissatisfied. She’s begun to fall in love with Godfrey?much to his chagrin. It’s a light, fluffy comedy with solid acting; Alice Brady’s Oscar-nominated performance as Irene’s ditzy mother is particularly delightful.

Trivia: William Powell, who played Godfrey, was actually Carole Lombard’s (Irene) ex-husband. The two actors?who had a 16-year age difference?had been married in 1931. They divorced two years later, only a few years before My Man Godfrey, but remained good friends and were able to work together on the film without bitterness.

For a hilarious screwball comedy with a sprinkling of romance, Bringing Up Baby (1938) is an enjoyable watch. David (Cary Grant) is a nerdy paleontologist who just wants to finish his dinosaur skeleton, get a grant for his museum, and make it to his wedding on time. Susan (Katharine Hepburn) is a free-spirited, eccentric young socialite who needs help managing a baby leopard her brother has sent from South America. Assuming wrongly that David is a zoologist, she enlists his aid?and as their comical misadventures spiral out of control, love begins to bloom.

Trivia: Although it now tops many lists of classic comedies, Bringing Up Baby was a notorious box-office flop when it was first released. In fact, after its dismal opening, the studio fired both the director and Katharine Hepburn from future projects. 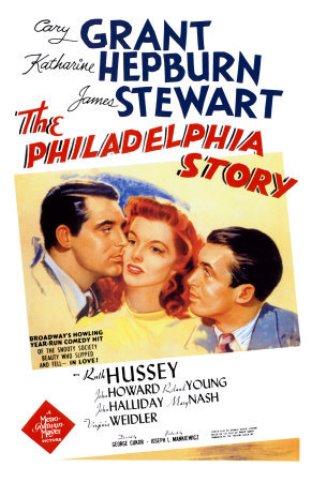 Another Katharine Hepburn movie, The Philadelphia Story (1940), reunites her with Cary Grant (and adds in Jimmy Stewart!) Snobbish Tracy Lord (Hepburn) is a wealthy socialite about to be remarried after divorcing her first husband. The wedding is to be the event of the year, and everything is perfect?too perfect.

Then Tracy’s ex-husband (Grant) and a handsome journalist (Stewart) both arrive on the eve of the festivities, and because they possess damaging information, she can’t send them away. Confusion, love triangles (times two) and some important choices propel this Philadelphia story to a happily-ever-after.

Trivia: Katharine Hepburn intended The Philadelphia Story as her ?comeback? film after a string of ?failures? (including Bringing Up Baby) and, with the director, purchased the film rights to the story in order to better control it. The film was a success both at the box office and the Academy, receiving six Oscar nominations and two wins.

One of my favourite romantic comedies is His Girl Friday (1940). Cary Grant plays Walter, a tough newspaper editor who’s let his personal life slide in favour of his profession. Then he receives a visit from his ex-wife, and former reporter, Hildy: She’s about to get remarried and leave journalism, Walter, and the area behind for good. She’s determined to make it happen; he’s determined to keep her there. Witty, with snappy, rapid-fire dialogue, this film seems surprisingly modern and is an excellent date movie!

Trivia: The director encouraged the actors to ad lib, and a number of unscripted in-jokes made it into the final cut of the film. For example, Grant refers to the sorry fate of ?Archie Leach,? who tried to put one over on the newspaperman; Grant’s real name was actually Archibald Leach!

Fraud and deception abound in 1941’s The Lady Eve. Jean and her fellow cardsharp con artists prowl aboard a steamer in search of victims to fleece. They settle on Charles Pike. He’s a trusting young scientist who’s returning to America after spending a year in the Amazon researching snakes; he’s also a beer fortune heir. The scientist falls for Jean, lets down his guard, and the cardsharps make a move on his fortune. But there’s a snag: Jean begins to fall in love with Pike. When Pike discovers her true identity, he’s furious, and dumps her. Broken-hearted, Jean sets out to exact revenge, and the resulting comedy of revenge, misunderstanding, and love moves to a satisfying conclusion.

Trivia: Pike’s pet snake was a real king snake, and it caused a great deal of trouble during the movie’s filming. Because filming occurred during the snake’s normal hibernation season, it spent most of its time trying to sleep. It also shed its skin numerous times.

In next week’s instalment, we’ll keep the love and laughter coming as we examine some later classic romantic comedies. Until then, happy watching, and happy Valentine’s Day!