It seems doubtful that any teacher in Canada would deny that an important aspect of education is to mould young people into well-rounded adults. A holistic approach combining practical with interpersonal knowledge is generally espoused by well-meaning educators as well as parents.

Yet there are many contradictions because we tend to value production, consumption, and truths external to the self more than reflection, perception, and truths found within ourselves. Happiness in Western civilization is often associated with the acquisition of material possessions. We learn that truths are arrived at by particular methods, methods that demand of us as much impartiality as we can muster. Far away and long ago, in ancient India, schools held similar priorities based around education as ?a source of illumination giving us a correct lead in the various spheres of life.?

Schools in ancient India were spiritual and isolated, and allowed women access to more positions of power than was common in other cultures. In the realm of science, ancient India was particularly advanced. Indian mathematicians ?introduced the zero, the decimal system and the method of multiplication.? The first documented university in the world was in India; it was known as Tashkila. Perhaps most important of all, each student in ancient India was fulfilling a ?supreme duty . . . to achieve his expansion into the Absolute, his self-fulfillment, for he is a potential God, a spark of the Divine.?

Indian education was moulded ?more by religious than by political, or economic, influences.? The conception of India as a nation, then, has come to comprise ?an extra-territorial nationality? based around ?the manifestation of the divinity in men.? The fact that in India divinity is inseparable from education meant that in ancient India the teacher-pupil relationship was sacred. In ancient times, a religious ritual known as ?Upanayana? involved the teacher ?holding the pupil within him as in a womb, impregnates him with his spirit, and delivers him in a new birth.?

This procreation metaphor of education must have provided a great sense of belonging to Indian students. They were not merely empty vessels receiving truths or wisdom, they were living personifications of that wisdom and thus played an active role in its creation and procreation. To embody values and truths is so different than to simply read and memorize them; instead of looking to the back of the textbook for answers, one need only look deeper within oneself!

In India, ?the forest, not the town, is the fountainhead of all civilization.? Unlike in the Western world, where cities have always been the seats of learning, education in ancient India was thought to require ?open space . . . aloofness? and a sense of ?wandering through eternity? rather than merely wandering through human civilization.

This apartness from the urban world played a central role in ?the two great ancient ages of India, the Vaidic and the Buddhist.? Being separated from the vicissitudes of daily social life allowed truths to more easily be revealed. Ancient treatises such as the ?aranyaka? contain in their translation evidence that they either ?originated in, or were intended to be studied in, forests.? In ancient India it is said that ?the current of civilization that flowed from its forests inundated the whole of India? and in this same way the minds of students felt themselves becoming naturally endowed with knowledge and wisdom. Learning was more of a flow or unfolding of one’s self than by a forced immersion in a pool of ?knowledge.? 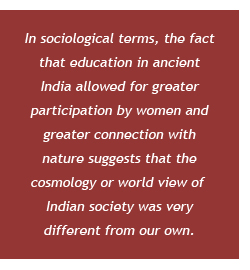 Whereas women only recently were even allowed access to an education in our society, in India ?the further back we go, the more satisfactory is found to be the position of women in more spheres than one; and the field of education is most noteworthy among them.? Women were allowed to study even the most sacred Vedic literature and to perform the most sacred religious rights. Many religious hymns of the ?Rig Veda? were composed by ?sage-poetesses.? Even the notion of marriage taught in ancient India was referred to metaphorical not as a master-servant relationship (?to love and to obey?) but instead in the most natural of terms, consisting of bride and husband ?merged like rivers in oceans.? Besides love and marriage, women in ancient India also possessed equality on the battlefield. Many women joined the army and participated in games with dice and balls. They even participated in chariot races. It was even possible for women to be crowned with the highest spiritual authority: guru status.

Ancient Indian educational institutions were so respected that ?Chinese scholars like Fa-Hien or Hiuen Tsang to India? undertook the long voyage to visit India. ?The enthusiasm for Indian wisdom was so intense, the passion for a direct contact with its seats was so strong, that it defied the physical dangers and difficulties which lay so amply in the way of its realization.?

Looking briefly at the accomplishments of Indian medical science, it is no surprise that visitors went to such great lengths to see India. During the 4th century BCE, Alexander the Great’s army of invading Greeks were amazed at how effectively Indian doctors could cure snake bites. Indian medical apprentices were taught circulatory science ?on the veins of dead animals? as well as ?application of bandages on stuffed human figures and the use of caustics on soft pieces of flesh.? Medical students even performed autopsies to understand the function and processes of the human body. (Meanwhile, in Western Europe autopsies were considered sacrilege until the last few centuries.) Corpses were ?decomposed in water and students were then required to dissect them and visualize the nature of skin, muscles, arteries, bones, internal organs.?

Doctors even invented and administered a vaccine against smallpox; the formula for which a medic named Dununtary was said to receive from God in a dream. The Indians also created the first hospitals. The aforementioned Chinese visitor named Fa-Hien described them as ?comfortable? and effective. Hospitals also served as teaching laboratories, culminating in a final exam providing credentials for would-be doctors. Nowhere else in the ancient world was the anatomical knowledge of India surpassed. India even made advancements in veterinary science; there existed a special field known as Hastyaurveda: ?The Science of Prolonging Elephant Life.? Perhaps the veterinary expertise endemic in ancient India should not be surprising considering that according to Hinduism ?animals were regarded as a part of the same cosmos as humans? and thus accorded similar respect.

In sociological terms, the fact that education in ancient India allowed for greater participation by women and greater connection with nature suggests that the cosmology or world view of Indian society was very different from our own. The theorist Michel Foucault described how all ways of arriving at truth are essentially human and subjective in origin when he stated that ?we can see, then, how vain and idle are all those wearisome discussions as to whether such and such forms of knowledge may be termed truly scientific, and to what conditions they ought to be subjected in order to become so. The ?sciences of man? are part of the modern episteme in the same way as chemistry or medicine or any other such science.?

In particular, Indian science and math and the example of the smallpox inoculation being ?discovered? by way of a dream sent by God illustrates how the limits of the thinkable were tied to divinity and the sacred in a way that modern science and Western civilization would find incomprehensible. Even the term ?discovered? implies truths waiting in the external realm for us to find them. In contrast, science in the West is like a treasure hunt and the map (scientific methodology) is the key to finding treasure. In ancient India it was possible for treasure to appear out of nothing other than the will of God. 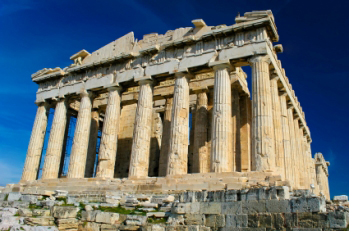