?If you have come to help me, you are wasting your time. But if you have come because your liberation is bound up with mine, then let us work together.?

El Bashir Hazzam was arrested in Taghjijt, Morocco, on December 7, 2009 and sentenced to four months for blogging about a student demonstration on December 1 and for a blog he had written in 2007. On February 8, in the Court of Appeal in Tiznit, El Bashir’s sentence was commuted from four to two months, counting the two months already served, and he was released that evening. (To read the background of this story see Part I of this article.)

The courtroom was packed with lawyers, journalists, activists, and friends and family of the prisoners. Supporters all over the world sat glued to Facebook, anxiously awaiting news of the outcome. Blogger El Bashir Hazzam, Internet café owner Abdullah Boukfou, and the three student protestors?Mohammed Chouis, Ahmed Habibi, and Abdul Aziz Al-Salami?were appealing charges stemming from a student demonstration in Taghjijt on December 1, 2009.

When the news of the prisoners? release was made known cyberspace resounded with a collective cheer from those who saw the freedom of Moroccan bloggers in particular.

Back in Hazzam’s village of Taghjijt the blogger was fêted, embraced, and questioned at length by family, friends, and journalists. With the consummate civility typical of Moroccans, he repeatedly thanked all those who had defended and supported him and who had brought his plight to international attention. 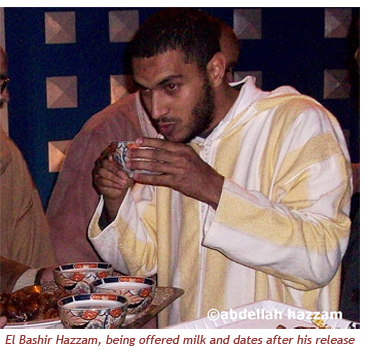 Meanwhile defenders of free speech in Morocco barely paused to draw a breath. As soon as the news circulated that El Bashir and his friends were free, up went a chorus of Yes, buts: Yes, but Boukfou is still in prison! Yes, but the doors of Le Journal Hebdomadaire are still closed! Yes, but there is still a menace hanging over the heads of our journalists!

In what seemed like the blink of an eye the Facebook site ?Free Moroccan Blogger El Bachir Hazzam? was changed to ?Free Moroccan Bloggers? and its focus shifted, in the midst of the celebrations, to working for the release of the other detained bloggers. There is much to be done in the wake of the government’s recent tidal wave of paranoia, and the Association of Moroccan Bloggers, which now includes El Bashir Hazzam, is busier than ever.

According to Mohamed Akinou, member of the national office of the Association of Moroccan Bloggers as well as a correspondent for Aljazeeratalk.net, the Association is diligently working toward the release of imprisoned blogger Boubaker Lyadib and Internet café owner Abdullah Boukfou, raising global awareness of threats to media freedom of speech, and, perhaps most importantly, continuing to exercise the inherent right to blog.

As for El Bashir Hazzam, he admits to having been surprised at first by the worldwide show of solidarity that accompanied his imprisonment, but he recognizes that the issue at stake?freedom of expression?is one of international significance. He’s still critical of his country’s track record on human rights but not without hope, saying only that Morocco is still years away from being a country that respects the fundamental human right to freedom of expression.

His recent experiences have given him an even more fervent resolve to exercise and to defend freedom of speech both in his own country and in developing nations. 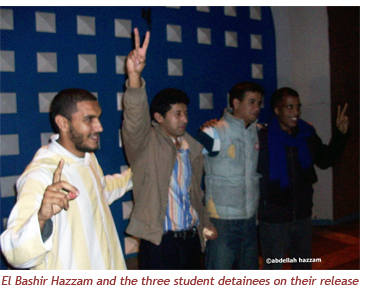