Although Valentine’s Day was earlier this week, there’s no need to push aside the romantic feeling! Last week we warmed the winter’s chill with some classic romantic comedies from the 1930s and 1940s. In this week’s Old Movies instalment, we’ll continue looking at romantic comedies, this time focusing on films released in the 1940s, ?50s, and ?60s.

As time went on, romance films began looking at heavier subjects, but still kept a lighthearted atmosphere. In The Miracle of Morgan’s Creek (1944), Trudy, a pretty small-town girl, sneaks off to a party to bid farewell to the soldiers leaving for Europe. The next morning, she finds herself married to a man whose identity she doesn’t even know. She then discovers that She’s expecting. A long-time would-be suitor steps in to help out, but when Trudy’s father (the local chief of police) gets involved, things become increasingly complicated, with Trudy’s beau thrown into jail and her dad fired from the police force. However, when the miracle occurs, all’s well in the end.

Trivia: The newspaper headline referring to Canada’s skepticism over the ?miracle? is in reference to Ontario’s record-breaking Dionne quintuplets, whose 1934 birth brought in $51 million in tourism to the province. Apparently, it wasn’t an honour Ontario was prepared to yield!

One of the few classic romantic comedies to deal with a consistently married couple, 1949’s Adam’s Rib is a must-see. Adam and Amanda Bonner (Spencer Tracy and Katharine Hepburn) have a good life. they’re both lawyers, have money, and their marriage is solid. Then Adam, a prosecutor, is assigned the case of a woman accused of attempting to murder her cheating husband. Amanda, who disagrees with his stance on the case, decides to defend the woman. The arguments play out not just in court, but also in the couple’s personal lives. The chemistry between Tracy and Hepburn and the film’s clever dialogue make this comedy sparkle.

Trivia: Early in the film, Judy Holliday (who plays the accused) is trembling as she speaks with Amanda. This was not acting; Holliday was extremely nervous about working alongside a screen legend like Katharine Hepburn. Hepburn, however, was apparently impressed with Holliday’s work. Allegedly, she built up Holliday’s reputation both with the director and with the press in order to jump-start Holliday’s career (her move was successful). Talk about non-diva behaviour!

The married man in The Seven Year Itch (1955) is also under duress, but of quite a different kind. With his wife and children out by the seaside to escape the city heat, Richard is alone in his apartment. He decides to improve himself in both health and knowledge while they’re away. However, he gets nervous when he reads a psychology book about the ?seven year itch,? a tendency of men married for seven years to begin seeking dalliances. Richard has been married seven years, but he’s determined it won’t happen to him. Then he meets his gorgeous new neighbour (Marilyn Monroe), and his lengths to avoid succumbing to the seven year itch and his neighbour’s charms make for a hilarious comedy. 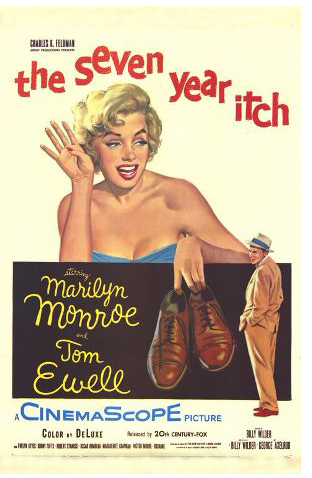 Trivia: This is the film with Monroe’s iconic subway scene, but the scene wasn’t accomplished easily. It was originally filmed on location, but whistling and noise from onlookers ruined the footage, and the scene was later recreated and shot on a studio soundstage. Monroe herself was difficult during filming; her lateness and her frequent inability to remember and deliver her lines properly caused the film’s budget to significantly increase.

Another Monroe film is the witty and comical Some Like It Hot (1959). Set in 1929, this comedy follows the fortunes of two male band players, Joe and Jerry. On the run from the police after a raid on a honky-tonk, and from the mob after witnessing a murder, the two are desperate to escape Chicago. Their solution: dress up as women and join a travelling all-girl band. ?Josephine? and ?Daphne? make it onto the train, but their troubles aren’t over. ?Josephine? begins to fall for wide-eyed singer Sugar (Monroe); and ?Daphne? is sought after by a persistent, aging playboy. When the mob boss arrives at their hotel, things really get complicated!

Trivia: The ?Florida? hotel where the band performed is actually located in Coronado, California. The Hotel del Coronado has been used in a number of movies besides this one. It was also frequented by Wizard of Oz writer L. Frank Baum, and it is said that the building’s imposing structure and lush surroundings inspired his description of the Emerald City.

A good family comedy for the month of Valentines is 1961’s The Parent Trap (the original, not the 1990s remake with Lindsay Lohan). Two girls (both played by Hayley Mills) meet at summer camp, and discover that they’re long-lost identical twins. Their parents divorced when they were babies, and each took custody of one of the girls. Neither girl has met her other parent, so the twins concoct a plan: they will switch places for a few weeks, then reveal their deception and attempt to reunite their mom and dad. But there’s a problem: the girls? dad has a new, gold-digging girlfriend who’s not about to let her wealthy man go. However, She’s no match for the twins.

Trivia: Although in this digital age we’re used to higher tech film editing and CGI, the ?split-screen? technology that allowed filmmakers to put side-by-side footage of the ?twins??played by one person?was a big deal for the time. The frames in which the twins appear together were filmed in two separate halves, and then copied together onto a new negative. To hide the line that would appear where the pictures changed, filmmakers used lines in the background props (windows, doors, etc.). 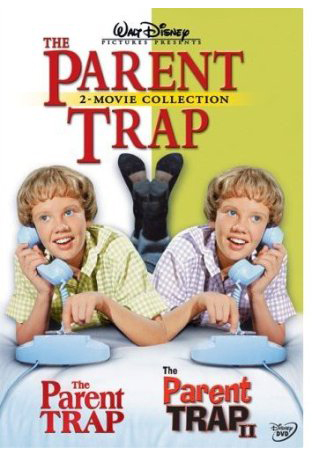 A lesser known, but still enjoyable, romantic comedy is That Touch of Mink (1962). Naive young girl Cathy (Doris Day) meets Philip (Cary Grant), a rich businessman, when his Rolls Royce splashes her, damaging her dress. His suave ways sweep Cathy off her feet, and she begins to fall for him (and vice versa). However, while Cathy is seeking marriage, Philip isn’t looking for long-term commitment. Add in Cathy’s suspicious roommate; an odious clerk determined to date Cathy; Philip’s frustrated assistant; and a nerves-related rash, and you have a light but enjoyable romantic comedy.

Trivia: In the Yankees game scene, real-life players Mickey Mantle, Roger Maris, and Yogi Berra make cameo appearances. The umpire who throws Philip, Cathy, and the three baseball greats out of the game is Art Passarella, an American League umpire from the 1940s and 1950s.

In a few weeks, in time for the Oscars, we’ll look at some of the history of the Academy Awards and review several Oscar-winning films. Until then, enjoy dipping into the delightful world of classic romantic dramas and comedies. Happy watching!