If you think surfing first became popular thanks to The Beach Boys, you’d be off by a couple of hundred years. Apparently, on Captain James Cook’s third expedition to the Pacific, Lieutenant James King made ?the earliest written account of surfing,? a diversion that was ?most common.?

Who says you need a surfboard to enjoy the waves? These dolphins definitely don’t. Photographer Greg Huglin captured these shots off the coast of South Africa, where the dolphins were making ?light work of monster waves up to 25 feet high.?

You don’t have to know anything about surfing to appreciate the incredible strength, coordination, and balance it takes to surf like this. This compilation is from the film Laird.

At its best, surfing is a graceful combination of power and beauty. At its worst, it looks something like this?a series of wipeouts filmed during Surfline’s 6 Weeks on the North Shore in Hawaii. Ouch.

When Ricochet was born, she was trained to be a service dog for someone with a disability. She excelled at the tasks, but a love of chasing birds meant she could be a danger to a disabled owner. Instead of focusing on Ricochet’s faults, her owner looked at the positives: Ricochet’s ability to surf. Ricochet is now a ?surfice? dog, raising funds for charity by riding the waves. 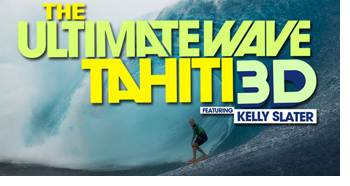 In Review – The Ultimate Wave Tahiti