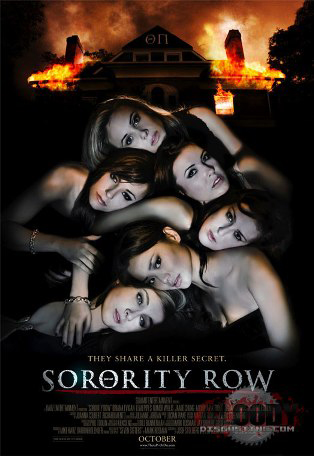 Take one horror movie, stir in a group of sorority sisters, a deadly secret, and a crazed killer, and what do you get? In the hands of director Stewart Hendler, probably not quite what you were expecting.

The fun starts not-so-innocently enough at a Theta Pi sorority party. Megan (Audrina Patridge) and her sorority sisters have cooked up a scheme to get revenge on her cheating boyfriend. When the prank goes horribly wrong, the girls swear to take the secret to their graves (and since It’s a horror movie, you just know That’s going to happen sooner than later).

But Sorority Row has a sly little twist in store: its humour. As Stewart explains, that element was a major draw when he first saw the script.

?I read this and I kind of saw this blend of Mean Girls kind of humour and Scream sort of self-awareness in it and I loved that,? he says. He saw the potential to ?really own it and enhance this kind of sarcasm and wit,? making it ?a celebration and a send-up of this crazy culture we have in America of sororities.?

Navigating that fine line between tongue-in-cheek humour and straight-up horror proved almost as elusive as the film’s hooded killer though. ?It was so much harder than I thought it would be,? Stewart says. ?It ended up being one of the big things that we really had to fine-tune over and over again in the editing process because we had several different versions of the movie, and some were too funny and you sort of lost the scariness . . . I think the humour, when It’s done right, kind of resettles you in your seat and then makes the next scare even more effective. We threaded that needle finally and got the balance correct.?

That doesn’t mean horror fans won’t get what they came for. Sorority Row has enough murder, mayhem, and scantily clad college students to earn its R rating. But in another twist on the genre, It’s the female characters that overwhelmingly drive the action.

?There’s definitely intentional ideas about sisterhood and working together,? Stewart says. ?Some people have called the film misogynistic, which I think is really funny because if you look at every male character in the movie, they’re all assholes, and ultimately It’s the girls who . . . have to find the good within the sorority system and work together to escape it.?

The ensemble cast handles the challenge well. Although fans of Audrina Patridge may be disappointed that she only appears for the first 15 minutes of the film, there are plenty of other interesting performances, particularly from Leah Pipes (Jessica) and Margo Harshman (in the role of Chugs). Chugs is the cynical, hard-drinking member of the group and it would have been easy to overplay those qualities. But Margo Harshman nicely balances the polished sorority-girl exterior with her character’s underlying anger.

And while Leah Pipes seems tailor-made for roles like the cool, sophisticated Jessica, you can’t help thinking that she’d handle a straight-up comedy role just as well. Briana Evigan (Cassidy), Rumer Willis (Ellie), and Jamie Chung (Claire) bring their own unique talents to the screen, and Stewart notes that it will be interesting to watch where they take their careers.

But for sheer physical presence, there’s only one thing to say: Carrie Fisher. From her first moments in the film, Ms. Fisher draws the viewer’s eye?and That’s in spite of being surrounded by a houseful of partying college students. She plays Mrs. Crenshaw, the Theta Pi house mother, and her brooding intensity seems effortless, conveyed without a word in the simple act of making a cup of tea. And she handles a shotgun hilariously well?especially when she isn’t firing it.

It may seem odd to recommend an R-rated horror film as good clean fun, but there’s something refreshingly self-aware about Sorority Row that makes the description fit. It’s a ?classic throwback slasher film,? Stewart explains. ?I think if audiences go in expecting a kind of tongue-in-cheek movie they’ll have a good time,? he adds, ?and if they’re expecting a gruesome, Hostel-style movie, It’s not going to be for them.?

He notes that the film sets out to be ?a good ride and a good laugh and a good scare.? If you like your thrills (and your white wine) with a twist of irony, It’s a ride you’ll definitely enjoy.