As Oscar season draws to its finale with this Sunday’s Academy Awards, film buffs all over the world are discussing the merits of this year’s top contenders. There’s also been a noticeable interest in recalling past Oscar-winning films. Although not all Academy-recognized old films are familiar, many have become long-enduring classics. In this week’s special Oscar instalment of Saturday Night at the (Old) Movies, we’ll look at Best Picture winners celebrating the 80th, 70th, 60th, 50th, and 40th anniversaries of their wins.

The Script: The film was based on the 1929 novel of the same name. The book’s author, Erich Maria Remarque, was a German World War I veteran who wrote the novel based on his own experiences with the reality and horror of war.

The Story: Fired up by the stories of his schoolmaster and fellow students, a young German man (Lew Ayres) and his friends join the army. they’re excited about the opportunity to experience the ?nobility? of war. However, a short time at the front?and its reality of death, danger, deprivation, callousness, and remorse?changes their outlook on war. But It’s not just their opinions that have been altered; It’s the once-naïve young men themselves: emotionally, they’ve become old. In fact, their former homes have become a strangely unreal fantasy world, where they no longer can belong. War has claimed them, body and soul, for its own.

Why It Won: It’s a powerful film. The movie’s stark realism and its ability to move the reader are legendary, and its use of revolutionary filmmaking techniques (like not using a soundtrack in order to convey the harshness of the surroundings and lifestyle) are effective even today.

The Bottom Line: All Quiet on the Western Front is not light fare. However, its realistic and skilful portrayal of the reality of war is striking, and, 80 years later, is still relevant. Thought provoking, this tragic film is a must-see.

The Script: Rebecca was based on the 1938 novel of the same name, by British author Daphne du Maurier.

The Story: Widowed nobleman Maxim (Laurence Olivier) brings his new bride (Joan Fontaine) home to Manderley, his country estate. However, the Manderley servants are ill-disposed toward the young woman; they still recall Rebecca, Maxim’s first wife, and the strange circumstances surrounding her disappearance and death. Although the new wife attempts to settle into Manderley and her marriage, she is relentlessly pursued by the haunting memory of Rebecca. 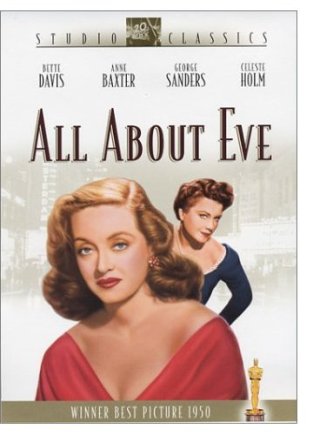 Why It Won: Hitchcock brought his characteristic expertise to Rebecca, and the film’s mood switches, suspense, and increasing sense of menace are skilfully juxtaposed with the young wife’s innocence and naivety. I loved the use of shadows and flickering lights to create moods! It’s not surprising that the film also received an Oscar for Best Cinematography.

The Bottom Line: Typical Hitchcock, Rebecca moves from light to dark, but ends with a glimmer of hope. It was Hitchcock’s first American film; he really brings home to Hollywood the concept of suspense as an art form. Not a light film, but a good one.

The Script: The film was based on a short story, ?The Wisdom of Eve? by Mary Orr, but the story itself was rooted in a real-life incident. Actress Elisabeth Bergner wrote in her autobiography about a similarly scheming assistant who attempted (unsuccessfully) to supplant her.

The Story: Aging but successful Broadway star Margo Channing (Bette Davis) is at the height of her career when she encounters Eve (Anne Baxter), a passionate young fan of her work. Eve’s open, honest demeanour and apparent naivety charm Channing, who takes the girl on as her assistant. However, Eve cunningly schemes to build her own career and fortune at the expense of Channing?s; through blackmail and sabotage, she uses friends and colleagues, and succeeds?apparently.

Why It Won: All About Eve is all about the characters. It boasts some superb acting from the ensemble cast. Although many cast members were nominated, only the actor playing the newspaper critic won a (well-deserved) Academy Award for acting; but the other performances were truly outstanding. The screenplay (also an Oscar winner) is well-written, with highly complex and developed characters.

The Bottom Line: Another deeper film, but a must-see.

The Script: Although the script was written as an original screenplay, elements of the film were inspired by various sources?for example, the Jennings Lang?Walter Wanger scandal in the early 1950s. Lang, an attorney, carried on an affair with producer Wanger’s wife; they used the apartment of an office worker as their rendezvous. (Scandal broke out when Wanger discovered the pair and shot Lang; Wanger was sentenced to four months in prison after pleading insanity.) 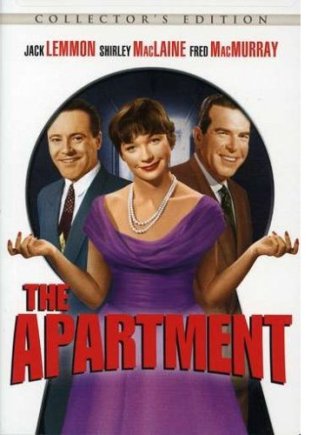 The Story: Low-level insurance company employee C.C. Baxter (Jack Lemmon) is on the promotion track?but not for his achievements. In fact, he spends most of his work time juggling the social schedule for his apartment, which has become the preferred place for Baxter’s managers to carry on their extramarital affairs. News of his promotion?and the availability of his apartment?reaches the ears of big boss Mr. Sheldrake (Fred MacMurray), who wants use of the apartment, too (and his own key!). However, things become complicated when Baxter falls in love?with Mr. Sheldrake’s mistress (Shirley MacLaine).

Why It Won: The script is funny without trying too hard. The acting ensemble as a whole?both major characters and minor players?is solid and believable, almost like watching reality play out (surprisingly, although several of the actors were nominated, none received an Oscar win). Impressive also was the way that director Wilder (who took home the Best Director Oscar that year) skilfully moved the film from comedic to darkly dramatic to romantic without any jarring discontinuities.

The Bottom Line: It’s one of those rare Oscar winners that isn’t dark, deep, or thought-provoking. It’s a great choice when you just want to relax and have a good laugh.

The Script: Because producers were unable to obtain General Patton’s personal writings and letters from his family, they based the film on two biographies of the general’s life.

The Story: Patton follows the titular hero through his involvement in World War II, particularly the campaigns in North Africa and Sicily. It’s not all battles, though: the film also focuses on Patton’s often controversial ideas, words, and actions.

Why It Won: Although Patton involves plenty of battles, it focuses equally?and seamlessly?on developing Patton’s character. George C. Scott plays the role of the legendary, outspoken general to perfection, bringing the man?and his personality?alive amidst the special effects. Scott also won an acting Oscar for his performance (although he declined to accept it due to his disagreement with the concept of competition among actors).

The Bottom Line: If you enjoy war films, modern history, or even biographical sketches of dynamic leaders, you’ll like Patton.

Next week, we’ll leave the halls of the Academy for the green fields of Ireland. In celebration of St. Patrick’s Day, we’ll look at some classic films that drew inspiration from Ireland and its people. Until then, enjoy the Academy Awards, and consider viewing some past award-winning classics. Happy watching!

* Between the 1929/1930 and the 1940 Academy Awards, the current Best Picture award was called Outstanding Production.

** Between 1944 and 1961, the current Best Picture award was called Best Motion Picture.