This coming week, everyone’s a little bit Irish as we celebrate St. Patrick’s Day. Ireland’s green hills and rich heritage have inspired filmmakers for years, both in modern times and during the classic film era. In this instalment of ?Old Movies,? we’ll look at some of these Ireland-inspired films: some powerful, deep movies and some lighter fare.

The Academy Award-winning The Informer (1935) is set during the 1920s Irish War of Independence. Irishman Gypo, anxious to impress his mercenary girlfriend and gain a reward, informs on an old childhood friend (and member of the IRA). Gypo’s guilt follows him through his subsequent ?successes,? and the film skilfully tracks the man’s slow and painful mental and emotional disintegration. Excellent acting makes this tragic film a must-see.

Trivia: Director John Ford sought realism from his actors, particularly Victor McLaglen, who played Gypo. For example, prior to filming the trial scene, Ford arranged that McLaglen would go out drinking, in order that he would show up on set hung over and emotionally overwrought (much like his film character was supposed to be). Ford used similar tactics throughout the shooting of the film, angering McLaglen, but it paid off; both McLaglen and Ford won Oscars for their acting and directing, respectively.

Another Ford film, The Quiet Man (1952), ends on a happier note. Nominated for Best Picture, with a star-studded cast including John Wayne and Maureen O?Hara, The Quiet Man follows the fortunes of Sean Thornton, an American boxer who has retired from his career after accidentally killing his opponent mid-fight. To escape his past, Thornton returns to live on his ancestors? farm in the Emerald Isle. He quickly falls in love with fiery redhead Mary Kate, but her controlling and stubborn brother, Will, first refuses to allow them to marry, and then withholds Mary Kate’s dowry. Mary Kate is furious that her new husband refuses to fight for her inheritance, but Thornton’s unwilling to revisit the pain of his past. Sweeping, sweet, and romantic?with a happily-ever-after for all parties!

Another Irish romance is 1948’s The Luck of the Irish. Fitzgerald, a New York journalist visiting Ireland, meets a leprechaun?and a beautiful girl. When he arrives home in New York to his wealthy girlfriend, he finds that the leprechaun has followed him. Hoping for a little assistance in matters of the heart, Fitzgerald enlists the leprechaun’s help, but the meddling fellow only succeeds in complicating the love triangle. It’s a light but enjoyable romantic comedy.

Trivia: In the original theatre release, the scenes that take place in Ireland were filmed with a green filter in order to tint them a more ?Irish? colour.

I See A Dark Stranger (1945) tells the story of Bridie, a fiercely patriotic young Irish woman. When Bridie turns 21, she decides to join the IRA and force the British out of Ireland. Her timing, however, is poor. The Second World War is in full swing, and in her haste to fight against England, Bridie begins aiding a Nazi spy. Things become more complicated when she begins to fall for a British counter-spy who is unaware of her loyalties. It’s part spy tale, part love story, and its darker themes are juxtaposed with moments of light comedy.

Trivia: You might recognize Deborah Kerr (An Affair to Remember, From Here to Eternity); Bridie was one of her earlier, pre-Hollywood roles. The Scottish-born actress began working in the US a few years after this film was released. 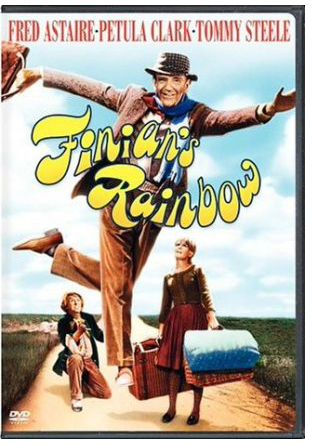 Finian’s Rainbow (1968) is the odd combination of Ireland, a musical, Francis Ford Coppola, and Fred Astaire. Surprisingly, it works! Irishman Finian and his daughter are bound for America, but Finian hasn’t quite left the old country behind: he’s carrying a pot of gold he stole from a leprechaun. As they settle into Rainbow Valley in the fictional southern state of Missitucky, Finian and his daughter become entangled in the local drama, including that created by the loud and racist state senator. However, Finian has troubles of his own; the leprechaun has followed him, and is desperate to regain his gold.

Trivia: When Finian’s Rainbow was filmed, Fred Astaire was nearly 70 years old and hadn’t done a movie musical in 11 years. Although the settings were not conducive to the suave routines seen in most Astaire musicals, the screen legend soon settled into his role.

Finally, for family viewing enjoyment, Darby O?Gill and the Little People (1959) is a good St. Patrick’s Day choice. Darby O?Gill, the former caretaker of a wealthy estate, spins tall tales about his encounters with leprechauns. Fantasy becomes reality, however, when he’s captured by the leprechauns and brought to their king. The ensuing battle of wits between himself and King Brian?played out alongside the budding romance between Darby’s daughter, Katie, and his replacement caretaker, Michael?makes for an entertaining evening.

Trivia: Yes, Michael McBride is played by a very young Sean Connery. In fact, his role in this film caught the attention of the wife of producer Albert Broccoli, who a few years later would cast Connery in his iconic Bond role in Dr. No.

The films reviewed here are only a smattering of those that bring us to the Emerald Isle, immersing us in its history and culture. Other noteworthy mentions include Odd Man Out (1947) and Ryan’s Daughter (1970), both Oscar nominees. Although many of the old Ireland-focused films are difficult to locate on VHS and DVD, several have expired copyrights and are available online. Happy watching!