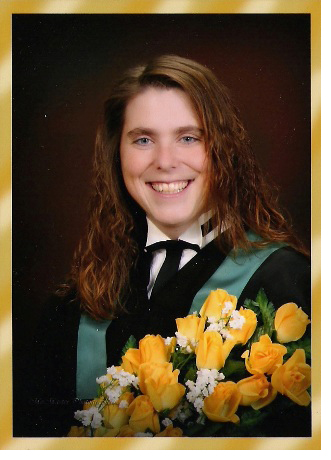 Although distance learning is flexible enough to suit any lifestyle, That’s not sufficient for success. As recent Bachelor of Administration (Health Studies) graduate DeAnne Csada discovered, flexibility on the student’s part is also required. Here, the mother of four discusses how studying led her to change her parenting style. She also gives strategies for balancing school and family life, and explains why studying while raising a family can be beneficial for everyone.

The wife of a police officer, DeAnne was a stay-at-home mom, but wanted more. Although she’d attended nursing college after graduating high school, health issues required her to drop out mid-program. ?Traditional school . . . wasn’t for me,? DeAnne says. ?I learn better at my own pace.?

However, part of her still longed to further her education. ?Every time . . . people asked what I did, [and] I told them . . . they gave me that ?Oh, I see? nod of the head,? she says. She decided to build her skills and self-esteem by going back to school, intent on earning a university degree.

Circumstances soon gave her the opportunity. DeAnne began studying with AU in 2001, when her son was a newborn. ?[He] was born a preemie and I wanted to stay at home with him,? she says. AU’s flexibility allowed her to care for him and her preschool-aged daughter, while pursuing her personal goals. During her eight years as a student, that flexibility was a lifesaver. Because of her husband’s job on the police force, she couldn’t rely on his working regular hours. In addition, after she gave birth to twins in 2007, the ability to adjust her school schedule to her changing responsibilities was crucial.

How did she juggle four kids and a degree? DeAnne was up to the challenge. ?I am very task-oriented,? she says. ?Organization is my middle name!? For example, she often combined studying with a trip to the playground. ?They . . . could interact with other kids while I sat and read a chapter or two,? she says.

Organization was vital, but equally important was the need to discover a sense of balance. ?Honestly, there were times I did burn out!? DeAnne admits. For example, when her son began attending school, she returned to work while taking five courses. Although she loved her job, she soon found that its demands threw her off track. ?It made balancing kids, life and work very difficult,? she says. ?I thought I was going to die!?

The experience taught her to make more realistic goals. ?I think learning to let go of some things and remembering I couldn’t do it all was key,? DeAnne says. For instance, when her children were busy or napping, she’d resist the temptation to do housework and instead use the quiet time to her studying advantage. ?Your kids aren’t going to grow up and remember your clean house!? she points out.

Despite the hectic lifestyle, DeAnne feels that studying while raising kids is valuable for the whole family. ?People think they can’t work on school while the kids are around,? she says. She, however, believes It’s a ?win-win? situation: ?I think kids nowadays are too [used to] instant gratification,? she says. ?It was . . . good for the kids to see me studying . . . they learn[ed] that it takes time and commitment to reach a goal.?

Although she would occasionally struggle with a sense of isolation, DeAnne feels that the end result was worth the trouble. ?There were many times that I felt alone,? she admits. ?Most people I knew were past the education stage.? However, putting her priorities in place helped her cope with this aspect of distance learning. ?Keep your end goal in perspective, and everything else will fall into place,? she advises.

?Athabasca was a wonderful experience for me,? DeAnne adds. ?[It] helped me to achieve a goal I otherwise wouldn’t have been able to.? Although She’s not currently working in the health administration field, she has no regrets. ?I have explored many different avenues throughout my years and I don’t consider any of them to be a waste,? she says. ?I believe that you should never stop learning!?