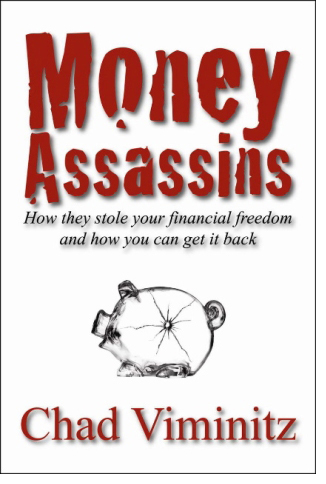 Spend less than you earn. Avoid debt. Stop buying toys just to keep up with your friends. Common sense, right? Stuff we already know, right? But if it really is common sense, why are so many people struggling with record amounts of personal debt?and increasing that debt by spending to fit in?

Those are some of the questions Chad Viminitz poses in Money Assassins, and you might be surprised at some of the answers.

Obviously, financial struggles existed long before credit cards; just ask all those Victorians who landed in debtors? prison. But Viminitz makes a strong case for the unique shift that happened around the 1970s, one That’s contributing to record levels of personal debt in some of the most affluent countries in the world.

The shift was a combination of three main factors, as Viminitz explains: ?the evolution of consumer society, advancements in technology, and increasing access to debt.? Together, these three forces are the Money Assassins.

Rather than taking a purely prescriptive approach, telling readers what to do, the author begins with an enlightening look at just how thoroughly (and subconsciously) these forces work on us. For instance, in examining the cultural and emotional drive behind our spending habits, he reveals the strange disconnect we’ve come to accept in the meaning of ?wealth,? especially the widely used yardstick of GDP.

The 1989 Exxon Valdez oil spill, ?one of the most devastating environmental disasters,? illustrates his point all too well. Even as nearly 11 million gallons of crude oil spilled into Prudhoe Bay, polluting the coastline and killing thousands of sea mammals and birds, the disaster contributed to the country’s economic ?success.? It gave an enormous boost to the GDP because of increased spending in all sorts of sectors, from media coverage to legal fees to travel.

The author demonstrates how that kind of skewed perception has become deeply embedded in personal spending patterns as well. As he explains, the accumulation of actual financial wealth, such as property and money, ?was once a benchmark for financial success.? But the typical North American now measures success by the perception of wealth. As long as you have the right car, take the right vacations, and have the latest electronic gadgets, You’re a financial success. It doesn’t matter that You’re wallowing in debt and don’t dare open your bills each month. It only matters that you appear to be keeping up.

(North Americans are hardly alone in the race to keep up with the Joneses. Just this week, a UK study showed that ?owning a fast car, a large home and having a good job? was only likely to make people happy if those around them ?are less well off.?)

But rather than just taking consumers to task for a lack of self-control, Viminitz also delves into the fascinating world that encourages that behaviour: marketing. If you grew up in the 1970s and ?80s, the chapter called ?Groomed to Consume? will be of special interest. As the author points out, those years marked the first time that kids were selectively targeted as consumers and ?we are only now seeing the first generation of adults whose financial habits have been shaped by these practices.? It should come as no surprise, then, now that many of those children are parents themselves, that today’s kids ?influence 62% of family SUV and minivan purchases.?

Viminitz has certainly done his homework and the arguments he makes are supported by solid references. You may not want to believe that advertisers try to manipulate you with things like neuromarketing (the ?science of watching and measuring brain activity? to effectively embed brands into consumers? subconscious thoughts), but you owe it to yourself to be aware of the marketing tools you encounter as a consumer.

Awareness really is the key to understanding why we spend (and fail to save) the way we do, and as the author points out, there’s a disturbing failure to educate young people about financial responsibility.

That’s where the second half of the book comes in, with the author outlining ?specific and practical ways to free up money so that more can be allocated and committed to eliminating debt and creating wealth.? The advice is practical (accompanied by financial calculators on the book’s website), and takes into account that change can be made in small, realistic steps, such as the guidelines for easing the cost of vehicle ownership.

Overall, the author has put together an engaging read that not only documents the financial reality that many face, but also why they face it and what they can do about it. Money Assassins offers intelligent advice no matter what stage of financial life You’re at, and opening the book may make it a whole lot easier to open those bills every month.

The Struggling Student Rants—Shop & Save into the Future