Articles
The Voice
In Conversation With . . . The Yes Men

?Resistance to oppression is often based on a love that leads us to value ourselves, and leads us to hope for more than the established cultural system is willing to grant … Love for others leads us to accept accountability (in contrast to feeling guilt) and motivates our search for ways to end our complicity with structures of oppression.?

Yes Men Andy Bichlbaum and Mike Bonanno are partners in crime in a series of ingenious hoaxes that are as entertaining as they are socially redemptive. Notable events include posing as Dow Chemical executives to announce a compensation package to survivors of the Bhopal pesticide plant disaster and later impersonating government representatives promising to reopen closed public housing for survivors of Katrina. Their second film, The Yes Men Fix the World, is reviewed here. (The DVD was released, quite appropriately, on April 1.) This week Andy Bichlbaum took the time to talk with Wanda Waterman St. Louis about false hopes, thinking outside the box, and staying in character.

Getting Away With It

We have a getaway car, of course. But the only way to get away with what we’re doing is to enjoy it a lot. At the beginning we had two or three legal advisors but they were just friends, or friends of friends.

We’d say, ?Oh?You’re a lawyer? Here’s a question?can we do this?? some of them would say, ?Yes, do it, by all means! You’re protected. Here’s why. Do whatever you want. Go wild.? Others would say, ?Well, you probably shouldn’t do it at all, or if you do it you should be really careful and do this . . .? We ignored those. 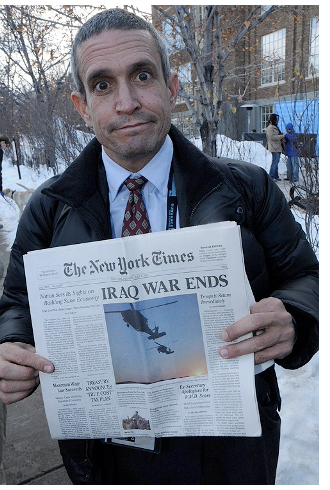 We eventually stopped asking. We figured it out and became legal experts. If they’re going to look ridiculous attacking you and you can drag them through the mud then they’re not going to attack you. And they can attack you no matter what you do, even if what you do is completely and thoroughly legal. They do that all the time. You just have to be prepared to drag them through the mud.

[The mainstream media has accused The Yes Men of raising false hopes among disaster victims.]

We agonized over raising false hopes. We knew by the time we went to India that they loved us; we wouldn’t have gone if we’d actually feared they’d strangle us (that was all staged). But we didn’t know for a month after doing the hoax and when we were in Switzerland we actually happened to meet a Bhopal activist, Rachna Dhingra. We were talking about Bhopal and somebody said, ?There’s a Bhopal activist in the audience,? and she stood up and said, ?We loved what you did!?

That was the first time we’d heard that. All we’d heard from the press was that we’d raised false hopes. At first we thought they might have actually done their research, being journalists and all. In the New Orleans case the media reported that we’d raised false hopes even though the victims hadn’t had one second to believe our hoax. There was no moment when any of the victims believed that the thing was actually happening; that was just pure fiction from the media.

How Did We Get Here?

It was 1999 when the protests against the WTO in Seattle were about to happen. We couldn’t make it to the protests so we set up a fake WTO website. It was a lark, a way to have fun and to use our talents as web designers to see what we could do. It was kind of a shock when the WTO reacted by exclaiming that our website was deplorable and that it undermined WTO transparency.

Nobody noticed their press release, so we helped them by blasting it out to thousands of journalists who had a good laugh at the WTO’s expense. This meant our site got into search engines and people started accidentally stumbling on it when searching online for the WTO.

Then we got invited to a conference intended for the WTO. At first we didn’t think, Hey, this is a great thing to do. We thought, Uh-oh?we got an invitation, what do we do? We sat on it for three months before it finally got through our thick skulls that we could just accept the invitation.

When You’re in that situation you just get into character. It’s a high-stress situation; You’re full of adrenaline, You’re posing as somebody You’re not, and you know there are stakes involved. So when audience members take it seriously and say these strange things the immediate reaction is exhilaration.

You go into it knowing that although these are all really nice, good people they just let themselves be part of a system That’s really gross so you don’t really expect anything different. So when they actually let loose with something like, ?Oh this is a great idea!? or ?This is refreshingly honest!? you think, Oh I can’t believe they just said that, That’s so wonderful! It’s really going to translate this whole thing for everybody. 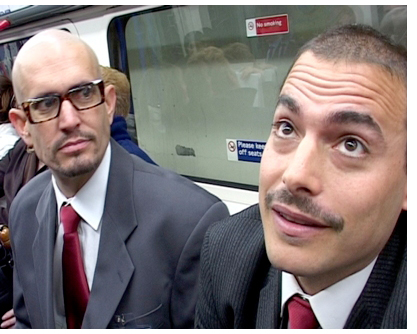 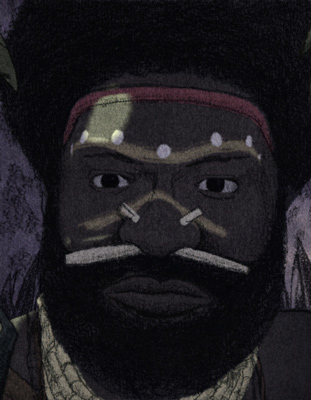