What the World Needs Now is Gildas, Reggies, and SurvivaBalls

?This American system of ours, call it Americanism, call it capitalism, call it what you will, gives each and every one of us a great opportunity if we only seize it with both hands and make the most of it.?

Two men in inflated grey suits that make them look like cartoon elephants walking on their hind legs squeeze down a railed boardwalk, waddle along a sandy beach, and saunter past graffittied walls. An animated film short extols the virtues of the suit, calling it a ?SurvivaBall,? revealing its capacity to drain ?power? from an animal in an emergency and even to join with other SurvivaBalls to form a massive human female form that dances slowly down apocalyptic streets, its occupants safer than houses.

The SurvivaBall is the alleged brainchild of Halliburton, an oil-rich corporation infamous for profiting from catastrophe. But the SurvivaBall is in fact just one in a series of brilliant hoaxes masterminded by Mike Bonanno and Andy Bichlbaum for the purpose of drawing attention to abuses of power perpetrated by government and big business.

Even more ridiculous than this rotund parody of a space suit is the response of some audience members at the conference of insurance brokers at which it is being presented. Some are smirking, sure, recognizing that on some level this really must be a joke, but most don’t so much as bat an eye when their impostor speaker praises the financial opportunities that were afforded by the Black Death and the Old Testament flood and points out that much money is to be made by exploiting disasters. 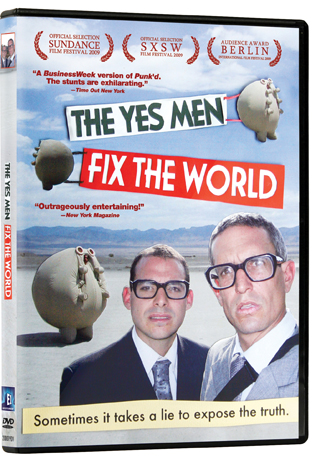 One sombre gent actually foresees advantages to marketing the SurvivaBall as a protection against terrorist threats. He points out that for those who feel they need such protection money would probably not be an object. Audience responses to other Yes Men gimmicks are just as appalling; one man laughs affably at the shameless pronouncement that the probability of human death and illness is an acceptable risk if projected profits are huge enough.

On the other hand, when the Yes Men give out effigy candles in the shape of deceased Exxon ?janitor? Reggie Watts at a Canadian oil conference they were less than politely ordered to git. Apparently a candle that smelled of burning flesh and was made in the image of a toxic waste victim didn’t exactly bring on the warm fuzzies.

Warm feelings did ensue when Andy Bichlbaum, posing as a Dow executive, announced that the company would be compensating survivors of the 1984 Bhopal pesticide plant leak to the tune of 12 billion dollars and would also be cleaning up the toxic site left behind.

Shareholders, proving once again that the market does not reward corporate integrity, quickly dumped enough shares to cost Dow Chemical 20 billion dollars within the next 23 hours.

Perhaps we have met the enemy and he is us. Or is he? When the Yes Men put out a fictitious New York Times paper dated six months down the road, full of headlines announcing the end of everything bad from global warming to the Iraq war to passing the buck, even jaded New Yorkers perked up. These fictitious articles, proclaim their authors, can actually come true if enough people resist the message fed them by a handful of government and industry elites.

The mainstream media makes Herculean efforts to heap shame on The Yes Men for raising false hopes among disaster victims with their hoaxes, first among survivors of the Bhopal pesticide plant disaster and then among long-time residents of New Orleans public housing projects who returned after Katrina to find that the government would not allow them back into their homes, now boarded up and earmarked for demolition.

The Yes Men actually went to these victims to gauge the level of this supposed false hope and found instead of bitterness a hearty approval and a deep gratitude to The Yes Men for bringing their struggles into the public eye. Just seeing that the injustice against them is being acknowledged and brought to light can sometimes give victims the strength to remove the barricades to their autonomy, freedom, and well-being. Sometimes all we need is for someone to walk by and cluck, ?Yup, you’ve definitely been shafted!?

The Yes Men have done far more than cluck. They’ve raised social activism to an art form and tossed in a healthy dose of good fun. May their deliciously dastardly antics never meet with retribution.

The Yes Men Fix the World meets seven of The Mindful Bard’s criteria for films well worth seeing: 1) it is authentic, original, and delightful; 2) it poses and admirably responds to questions that have a direct bearing on my view of existence; 3) it stimulates my mind; 4) it harmoniously unites art with social action, saving me from both seclusion in an ivory tower and slavery to someone else’s political agenda; 5) it displays an engagement with and compassionate response to suffering; 6) it gives me tools enabling me to respond with compassion and efficacy to the suffering around me; and 7) it renews my enthusiasm for positive social action.

From Where I Sit – Sex Appeal, Redefined