News & Events
The Voice
Click of the Wrist – Under the Volcano

Volcanoes have been a source of fear and fascination for millennia. They’ve spawned books and movies and even tourist adventures. From towering mountains to ocean floors, we take a look this week at the mighty power of volcanoes.

Dining Atop a Volcano

Some people think snagging a spot in an exclusive restaurant is a challenge. But how about dinner atop an active volcano? Iceland’s Fimmvorduhals volcano, in the middle of the Eyjafjallajokull glacier, erupted on March 21, and one couple accepted an invitation to dine there?on a meal cooked on the hot lava.

This National Geographic primer takes you on a historical tour of volcanoes, ?objects of terror and fascination since the beginning of human time.? Today, there are some 550 active volcanoes around the globe, with ?500 million people living in their dangerous shadows.?

According to this video, much of the ocean floor has been formed by volcanic activity. In fact, 80 per cent of volcanic eruptions take place underwater. This incredible video gives a glimpse of molten lava flowing across the sea floor.

On this site, the Discovery Channel takes you to a summer day in A.D. 79, the final day of Pompeii. In one spot, the idyllic town of Herculaneum, a surge of molten lava and boiling mud ?hurled down on the beach area, covering the seven miles to the coast in about four minutes.? You’ll also find amazing videos of modern-day volcanic eruptions, and a quiz to see if you could have escaped Vesuvius.

There are webcams for traffic and puppies and birds? nests. So why not volcanoes? This clip offers a look at five of the most popular volcano webcams around the world, from Hawaii to Alaska. The clip includes URLs for all the webcams, so you might be lucky enough to see some lava. 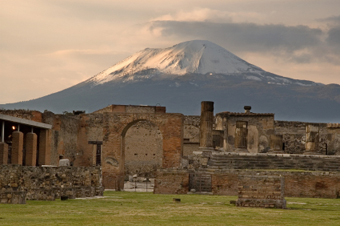