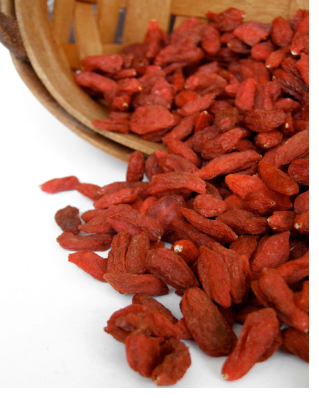 What are these strange little red raisin look-alikes? Also referred to as the wolfberry, goji berries (Lycium barbarum) are the fruit of a perennial shrub that grows natively in China, Japan, Korea, Vietnam, and Tibet. (Interestingly enough, researchers have also found small areas of goji surviving closer to home, in Arizona). Growing up to five metres in height, the goji plant is a hardy one, thriving along floodplains and ecologically used in erosion prevention.

Possibly the largest harvests of goji berries are reaped from Ningxia, China; this area boasts several million acres of goji plants available for harvest. In fact, since ancient times, an annual festival is celebrated that corresponds to the harvest date of the goji berry crop. Goji berries are used in Chinese cooking, especially as an adjunct to soups or stews.

So, why the name goji? Although the origin of this name is unknown, It’s been suggested that it is a Western take on the Mandarin name gouqi, used to refer to the plant.

The claims about the goji berry first began in the West when we discovered its high antioxidant capacity. (Goji berries have been used as antioxidants in the East for thousands of years). An antioxidant is a compound that has the ability to neutralize free radicals. More simply put, an antioxidant counters cellular damage and negative cellular effects that occur in our bodies on a day-to-day, minute-by-minute basis by the action of just living. Although a certain quantity of free radicals produced by our bodies is considered normal, factors like pollution, poor diet, and stressors can significantly increase free radical production, and hence the use of an antioxidant helps bring back a health balance. Often, fruit-based antioxidants are brightly coloured (think of purplish-red grapes and orangey-red goji berries).

It’s been proposed that goji berries are the most antioxidant-rich fruits currently found on the earth. Although this hasn’t been quantified scientifically, it is safe to conclude that, looking at the nutritional profile of these two-inch-long berries, they are exceptionally good for you!

Goji berries also contain a wide variety of trace minerals (e.g., boron), and carotenoids (hence the berries? orange-infused colour). Goji berries are also significantly higher in vitamin C content than a traditional orange, and contain several B vitamins, including thiamine (B1), riboflavin (B2), and pyridoxine (B6). The B vitamins are cofactors in a host of cellular processes.

Several analyses of goji berries have revealed that they contain certain key chemical compounds. For instance, the berries are source of betaine. Betaine is what gives goji berries their sweetness (It’s also found in sugar beets, although in higher quantity). Chemically, betaine is a methyl donor, meaning that it is used in many of the body’s chemical reactions and also aids in liver function, muscle growth, and cellular replication. 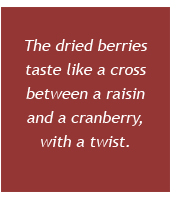 Another compound in goji berries is physalin, a steroid-ring compound whose functions are still largely unknown. However, physalins are known to possess antimicrobial effects, and suggestions have been made for studying physalin concentrations and their positive effects on leukemia.

Goji berries also contain solavetivone, which is antimicrobial like physalins; it is also thought to be antifungal. Additionally, the berries are also a minor source of beta-sitosterols, plant-derived phytoestrogens that are largely used in treating benign prostate hypertrophy (BPH).

Goji berries come in a variety of forms. As with most fruits, the fresh, raw berry is the most ideal, but logistically It’s difficult to access these fresh berries in North America. One option is to consume a small amount (i.e., one to two tablespoons) of goji juice daily, since the juice is made from the fresh berries. The juice should be a whole-fruit juice; in other words, the entire fruit should be used to make the juice, and these fruits should not be strained out at the end. (A comparison would be a carton of orange juice (oranges pulverized then strained) contrasted with whole oranges crushed in your blender (no straining)).

The whole-fruit juice ensures that the health potential of the berries is still accurate. The juice is a vivid orange in colour and tastes similar to sweetened carrot juice. If You’re not keen on consuming the juice on its own, you can mix it into a smoothie or with other juice (e.g., orange) to dilute the taste.

In addition to the juice, consuming dried goji berries is also an option. The dried berries taste like a cross between a raisin and a cranberry, with a twist. I often add a handful of berries to a homemade nut-and-raisin trail mix, or you could sprinkle two to three tablespoons onto your breakfast cereal or into a salad for an exciting option. If You’re really ambitious, you could even try the fermented goji berry beer That’s popular in China. Imagine cooling off on a summer afternoon with goji beer! (Unfortunately, I haven’t actually seen this product yet sold where I live in Canada.)

Although the media hype surrounding the health claims of the goji berry may be cause for suspicion of these claims? validity, it does appear that the berry possesses a modest array of health benefits. If you happen to pass by your natural health food store, drop by to take a look and get acquainted in person with the goji berry!

Katie D?Souza is an AU graduate and is now a licensed naturopathic doctor. She currently lives in Ontario.

The Fit Student—Boost Your Energy! 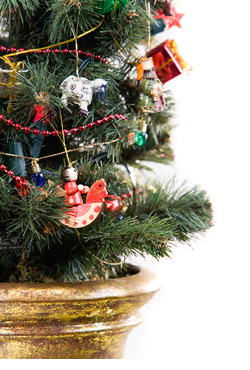 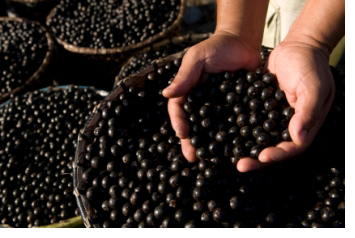