Features
The Voice
Saturday Night at the (Old) Movies – Shakespeare on Screen, Part I

Many films, both older movies and modern productions, look to classic literature for inspiration. However, few authors have had more influence on the movie industry than William Shakespeare. Because his plays explore the complexities of human relationships, they have transitioned well to the world of cinema. In fact, since the dawn of the movie age, there have been over four hundred film adaptations of Shakespeare’s tragedies, comedies, and histories?some largely faithful to the original plays, and others looser adaptations.

This April 23 marks the 446th anniversary of the Bard’s birth. In his honour, the next two instalments of ?Saturday Night At the (Old) Movies? will look at several popular film versions of Shakespearean plays. In this week’s instalment, we’ll focus on some of the older film renditions of the plays themselves, while next week’s instalment will review those adaptations that offer a variation on the main story.

One of Shakespeare’s best-known plays, Romeo and Juliet, is a tale that seems made for cinema. The young lovers from feuding families, and their passionate courtship and tragic end, have inspired filmmakers as early as the year 1900! A recommended classic film version of Romeo and Juliet is the 1936 one, starring Norma Shearer and Leslie Howard. It’s an excellent combination of theatre and film; the acting is well-done, if theatrical, and the rich costuming and lavish sets make this film version of the tragedy a treat for the eyes.

Trivia: English majors will be intrigued to learn that William Strunk, Jr.?the Strunk who co-authored The Elements of Style?was employed (and credited) as a literary consultant to the film’s production. Apparently, the producer told Strunk that his job was to ?protect Shakespeare? from the film types!

By contrast, the sets and camerawork of 1968’s Romeo and Juliet, helmed by director Franco Zeffirelli, are not quite so magnificent. What the film might lack in cinematography, however, it more than makes up for in passion. When casting, Zeffirelli took a gamble and cast two very young (Juliet is played by a 15-year-old!), unknown actors in the lead roles. The risk paid off; the youth and onscreen chemistry of this Romeo and Juliet truly bring home the tragedy of the ill-fated lovers. The use of chant and sacred music in much of the score is an excellent touch. Although Shakespeare’s original language is used (and sometimes seems slightly beyond some of the young actors), the film is surprisingly modern. Even those less keen on Shakespearean tragedies will enjoy this masterpiece.

Trivia: The prologue and epilogue are voiced by legendary actor Laurence Olivier, who appeared in several of the most famous film versions of Shakespearean plays (including 1948’s Hamlet and 1965’s Othello) and numerous other films (Wuthering Heights, for example.)

A less tragic love story is The Taming of the Shrew, which follows the courtship of acid-tongued Katharina by a fortune-hunting young man, Petruchio. Aside from a silent film version from the early 1900s, the only film adaptation 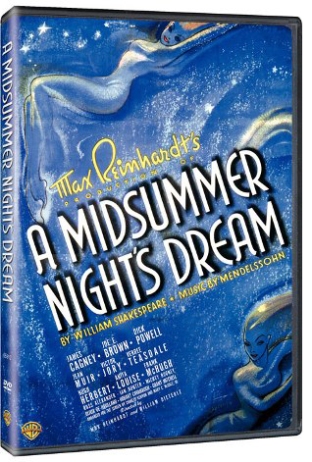 of the actual play is the 1967 version, starring Elizabeth Taylor and Richard Burton. Taylor plays the rude and shrewish Katharina to perfection, and her chemistry with real-life husband Burton (Petruchio) makes sparks fly during the couple’s onscreen spats. The costuming and supporting cast are also good, but Taylor and Burton definitely steal the show.

Trivia: Burton and Taylor invested $1 million of their own funds into the film’s production, and requested a share of the film’s profits in lieu of a salary. The Taming of the Shrew went on to be a box office success.

Based on another romance-comedy, 1935’s Oscar-winning A Midsummer Night’s Dream is another good choice. The film won an Academy Award for Best Cinematography, and the work is truly excellent given the year it was produced. It’s interesting to watch the way the cinematographer created moods through light patterns, reflections, mist, and clarity. The score, based on Mendelssohn’s work, is also beautiful. Although some of the acting seems a little forced, young Mickey Rooney’s manic interpretation of Puck is particularly well-done.

Trivia: Although the cinematographer was given an Academy Award for his work on this film, he had not been nominated but was a write-in candidate. It was after this win that the Academy stopped permitting write-in votes during the awards.

Shakespeare’s historically based plays also translated well to cinema. 1953’s Julius Caesar has a star-studded cast with good acting from the principals, and won an Academy Award for its art direction (and was nominated for its cinematography). The camerawork, lighting, and soundtrack enhance the mood of the play, and Marc Antony’s oration is particularly memorable.

Trivia: You may recognize several of the actors: Marlon Brando (A Streetcar Named Desire, The Godfather) was nominated for an Oscar for his passionate portrayal of Marc Antony; and Deborah Kerr (From Here to Eternity, An Affair to Remember) plays a stirring Portia.

One of the most stunning Shakespearean film adaptations is surely legendary director Orson Welles? Othello: The Moor of Venice (1952). The film begins in a similar manner to Welles? acclaimed Citizen Kane: by playing the film’s final scene. As the story unfolds, viewers see how the various characters came to arrive at their respective fates. Although the film has removed some of Shakespeare’s original dialogue in favour of voice-overs, the character development and changing moods are not affected; Welles, through use of light, camerawork, and particularly the musical score and audio effects, does a masterful job of conveying the sense of this Shakespearean play. 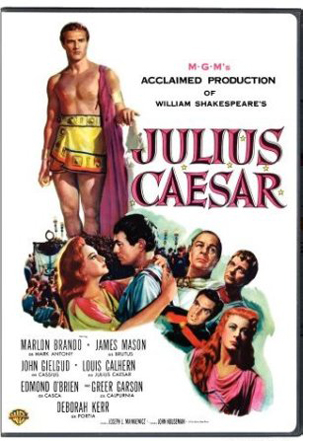 Trivia: The production was plagued by financial woes. After one of the film’s backers went bankrupt, filming ground to a halt and was completed piecemeal over the next few years as Welles earned enough personal cash to continue with the project.

Many other groundbreaking directors tackled classic Shakespeare at some point during their careers. Fans of Roman Polanski’s work will appreciate his cynical 1971 take on Macbeth. Although Shakespearean scholars have decried the changes he introduced (for example, the character of Lady Macbeth starts out much younger and much more innocent than she has traditionally been played), and in particular the film’s altered ending, Polanski’s choice to focus on the psychological impact of the Macbeths? actions is effective. The visual imagery and sound effects particularly underscore the rise and fall of the Macbeths? ambition and sanity. (Note: graphic and disturbing in parts, this is not a film for children!)

Trivia: Macbeth was the first movie Polanski directed after the murder of his wife and friends by members of the Manson family; some critics believe that the bleakness and gore present in the film reflect Polanski’s own depression and pessimism.

Finally, one of the most acclaimed Shakespearean film productions is 1948’s Hamlet, directed by actor Laurence Olivier and starring Olivier himself in the title role. Literary purists often object to the removal of much dialogue (the original play takes over four hours, whereas the movie clocks in around two) and the deletion of some of the characters and subplots. However, Olivier chose to focus his version of the play on Hamlet’s psychological turmoil, and the result has largely been lauded by critics, scoring several Academy Awards (including Best Picture).

In next week’s instalment, we’ll take a more relaxed approach to the Bard’s work and look at films inspired by Shakespearean plays. In the meantime, try to find some of the older interpretations of Shakespeare on film; you’ll be amazed just how watchable these four-hundred-year-old plays can really be! Happy watching!