Last week, we started our celebration of Shakespeare’s birthday (April 23) a little early by reviewing several classic film renditions of his plays. For those who find the traditional language and theatrical style of the original plays difficult to watch however, there are still ways to enjoy the rich Shakespearean tradition on film. In fact, a surprising number of ?regular? movies are based loosely on, or inspired by, the Bard’s plays.

Although these films might keep essential elements of the stories, they are often more accessible to modern viewers. Better still, they cover a wide range of film genres for those less keen on the theatrical style: from musicals to drama to westerns to science fiction, and everything in between. In the world of film, Shakespeare truly is for everyone!

One of the most well-known Shakespearean film adaptations is the 1961 musical West Side Story. Based on the Broadway musical of the same name, the Academy Award-winning West Side Story takes the tragedy of Romeo and Juliet and moves it to 1950s New York City. The feuding families are now feuding teenaged gangs, the Sharks and the Jets, and the main players? names have changed, but the forbidden love of Tony and Maria is still as romantic and tragic as was Romeo and Juliet?s.

Trivia: Although several of the original Broadway cast members were cast in the film version of West Side Story (either in their original roles or in a different role), Tony and Maria were recast; producers felt that younger actors were needed to seem believable as teenagers. You might recognize Maria, who is played by a grown-up Natalie Wood; one of Wood’s other most famous roles is little Susan in 1947’s Christmas classic Miracle on 34th Street.

Another popular musical film is Kiss Me Kate (1953), but its tone is much more upbeat! The movie is structured as a play-within-a-play, weaving the real-life drama into the onstage performance. Fred and Lilli, divorced theatre actors, are co-starring in a stage production of The Taming of the Shrew. In the roles of Petruchio and Katharine, their bickering appears authentic, but the onstage animosity between the two is no act. The pretty actress who plays Bianca, her no-good boyfriend, and a pair of debt-collecting gangsters complicate matters, but help bring both the play and its players to a happy close.

Trivia: Did you notice several instances in which the characters seemed to be throwing items (or themselves) at viewers? Kiss Me Kate was originally filmed in 3D, and was screened as a 3D film in local theatres when it was first released.

Real-life identity and stage persona also get mixed in 1947’s A Double Life, although the results are more tragic. In this clever film noir, an actor playing the title role in a production of Othello identifies too closely with his character’s deadly jealousy. Eventually, his perception of reality begins to crumble, culminating in murder. The cinematography does an excellent job of underlining the blurring distinction between reality and fantasy. 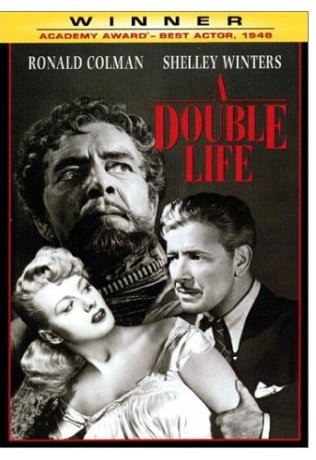 Trivia: Ronald Colman, who played the unstable actor, won an Academy Award for his work (the film was also awarded the Oscar for Best Music).

Another rendition of Othello, All Night Long (1962) transfers the tale of ambition and jealousy to 1960s-era London. Here, jazz musicians become embroiled in a plot that largely follows the storyline of the original play. Good music and a more upbeat ending make this a more feel-good film than other adaptations of the play.

Trivia: All Night Long includes cameos by many jazz greats of the time, including Dave Brubeck, Keith Christie, John Dankworth, and Charles Mingus.

Musicals and plays-within-plays were not the only film genres that tackled Shakespearean adaptations: dramas, westerns, and science fiction films all have made their mark in the world of Shakespeare on film. One of the best adaptations of all is Orson Welles’s historical drama Chimes at Midnight (also known as Falstaff) (1967).

It’s based on several of Shakespeare’s historical plays (The Merry Wives of Windsor, Richard II, Henry IV part I, Henry IV part 2, and Henry V), and the dialogue uses Shakespeare’s original language. However, rather than focusing on the political drama involving the kings, as did Shakespeare, Welles’s film is a character study of the rise and fall of Sir John Falstaff, companion to Henry V. Although difficult to locate, the film is a gem, and has been considered by some (including Welles himself) to be Welles’s greatest work.

Trivia: The scene depicting the Battle of Shrewsbury is said to have inspired similar scenes in modern films like Braveheart and Saving Private Ryan.

Yellow Sky (1948) is a surprisingly good western based on The Tempest. A bank robber and his fellow gang members, fleeing the law, come upon a largely abandoned ghost town, Yellow Sky. Its lone inhabitants: an old man (the Prospero character) and his spunky granddaughter, Mike (the Miranda character). Greed, honour, and love all compete as the two worlds collide.

Trivia: You might recognize several screen legends among the cast: Gregory Peck (Roman Holiday, To Kill a Mockingbird) plays chief outlaw Stretch, and Anne Baxter (All About Eve, The Ten Commandments) is Mike. 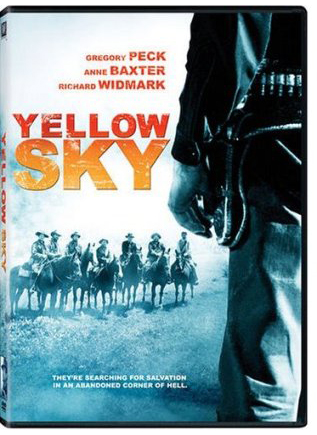 Also based on The Tempest, futuristic sci-fi movie Forbidden Planet (1956) moves the setting to distant planet Altair IV, where an expedition is headed to determine the fate of a human colony that had disappeared 20 years earlier. They soon find the only survivors: Professor Morbius (the Prospero character), who has developed his intellect and skill on the planet and refuses to leave; and his daughter Altaira (the Miranda character), who has never seen another man and who begins to fall for the expedition’s young commander. A murderous monster (the Caliban character) begins to slowly pick off the crew members, and the dramatic music raises the suspense as the monster is revealed in a final twist.

Trivia: Forbidden Planet was the first film to employ a completely electronic musical score, and it did so before the synthesizer era. The score was composed by Louis and Bebe Barron, musicians and pioneers in the very new field of electronic music. To produce Forbidden Planet‘s innovative sound, the Barrons created electronic circuits to provide the array of base sounds, and used special audio effects to create countless variations on the theme.

British and North American filmmakers weren’t the only ones inspired by Shakespearean literature. Japanese film Throne of Blood (1957) is a fascinating adaptation of the tragedy of Macbeth, set in the world of feudal Japan. In fact, many critics consider it to be one of the best adaptations of Macbeth ever made. The plot closely mirrors that of the original play, although the setting, characters, and costuming are so different that it seems its own creation.

Trivia: Talk about realistic acting! When the death scene of Washizu (the Macbeth character) was filmed, real arrows (shot by professional archers) were used in order to make the actor’s expressions of fear more realistic. The film’s director sought realism in other details, too. For example, the castle was shot near Mt. Fuji, and since the castle’s courtyard was filmed in a different location, the production crew brought dirt from Mt. Fuji to ensure that the landscapes matched.

Shakespearean literature is typically read, but it was originally intended to be dramatized and viewed. Attending a theatre performance isn’t always practicable or possible. Fortunately, however, filmmakers over the past century have made so many widely varied adaptations that the Bard’s work truly is accessible to everyone, both literally and figuratively. On April 23, make a bag of popcorn, fire up the DVD player, and immerse yourself in Shakespearean drama! Happy watching!