Features
The Voice
Editorial – A Penny for Your Thoughts

A couple of interesting stories popped up recently that, even though fairly innocuous in themselves, highlight a much more interesting trend: our move to a cashless society, and just how much it could cost you.

The first item was about renewed calls to get rid of the lowly penny. Last month, the standing Senate committee on national finance ?announced it would begin a study on the costs and benefits of the penny, including the possibility of eliminating it.? The second story came as a bit more of a surprise. With no public announcement, Air Canada has made the move to credit-card only cabins. As of May 1, your cash, debit cards, and traveller’s cheques can’t be used for on-board purchases (though there are still some exceptions).

So what’s the big deal? After all, Australia and New Zealand removed their one- and two-cent coins more than 10 ten years ago and the sky hasn’t fallen. New Zealand even got rid of its five-cent coins in 2006 and Australia will probably follow. Hurrah for going cash free, you might think. While everyone’s at it, let’s just eliminate annoying, bulky coins altogether and eventually do away with paper currency. Debit, credit, and gift cards are fast and convenient to use, and Canadians already pay for 31 per cent of transactions with credit cards (cash is used 29 per cent of the time).

But will we feel the same when our payment options are limited to two or three major companies that can raise fees knowing consumers have no options left?

Just for fun, let’s look at how much credit cards already increase prices. First there are the annual fees that you pay directly, plus interest charges. On top of that, merchants pay ?two to four per cent of the sale price in various transaction fees,? like the merchant discount rate and interchange fees. Got a ?premium? card? The credit card companies charge merchants even more when you use it. Then there’s the cost of renting the terminals you swipe your card in.

Paying with cash costs merchants time and money too, but you might be surprised at the difference. Buy a $36.50 item using cash and it will cost the store 25 cents to process the sale. Using a credit card? The store just got hit with 82 cents in fees. Which means you just did too?on the price tag. (Debit card costs are only 19 cents for the same sale amount.)

Right now, consumers have a choice, and a growing number of merchants are pushing for standardized discounts to customers who pay cash. In a cash-free society, what would that choice be limited to?

In Canada, Visa and MasterCard currently dominate the industry with a combined 80 per cent share. In the US, card-issuing banks rake in more than $40 billion each year in ?swipe fees? alone. The fees are set by credit card companies?and they’re fighting hard against consumer protection bills to limit them. You have to wonder how high those fees would get if consumers had no alternative ways to pay (you can choose lower-cost debit cards now, but that will change with the credit companies? push into the market.)

Is it time to bid farewell to the one-cent coin? Probably. But as we slowly move closer to a cash-free society, we’d be smart not to mistake all that shiny plastic for pennies from heaven. 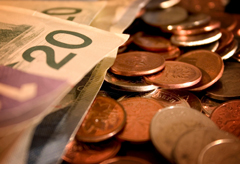 On the Hill – Penny Wise