Articles
The Voice
Eras in Education – Time and Its Discontents: Industrialized Education at the Dawning of Modern Schooling 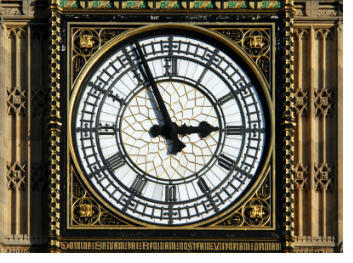 In my elementary school the seventh grade was the last before entering high school. This was a fact our teachers ceaselessly reminded us of. One of the sternest warnings we received was about what a sociology text might call ?the rigidity of bell structures.? In other words, tardiness was not tolerated.

I still recall my teacher telling stories of how the bell for first class would toll at precisely 8:01 a.m. and at 8:02 a.m. the door would slam shut like a coffin or prison gate. It was not without a degree of wry humour that I say this; we as students tended to feel that the real inmates were the ones who made it to class on time! As it turns out, meticulous timekeeping and rigid enforcement of learning styles were ideals that found root in the Industrial Revolution some 150 years before our time.

The first mandatory public schools existed in a social environment in which time was heavily guarded, highly valued, and constantly commodified. In a study of the rise of clocks in England during the 1600s to 1900s, E.F. Thompson described how capitalists sought to maximize productivity and preachers sought to minimize idleness. Indolence (laziness) became far more discernible under the menacing gaze of a town’s parish clock. An early clockmaker complained that ?Virtuous matrons . . . are consigning their clocks to lumber rooms as ?exciting to acts of carnality.??

Similarly, an English anthropologist in Fiji noted that people there kept time according to shadows on the floor from whichever door was open in their cottage. He then proceeded to speak with some disdain of the fact that when the wind shifted and a different door was left open the result was that the woman providing him with sustenance ?often makes my tea at three o?clock instead of six.?

The theme of the 1800s was a heightened sense of time, which created ?a severe restructuring of working habits?new disciplines, new incentives, and a new human nature . . .? For young people, youth was now seen as a time to accomplish specific tasks besides those of the home, farm, or shop.

Schooling for ?the masses? began during the 1800s in England. It was organized along the lines of a factory, with time being of the essence. The writer Charles Dickens, who never spared illustrative expense in describing deplorable life conditions, spoke of clocks ?which measured every second with a beat like a rap upon a coffin-lid.? In describing pupils of his day Dickens wrote of ?children with the countenances of old men . . . There was childhood with the light of its eyes quenched, its beauty gone, and its helplessness alone remaining.? Well-meaning ?academic clocksmiths, anxious to patent new keys? came up with various education models designed to maximize student potential. Perhaps the most extreme of these was a school proposed by Thomas Wedgwood.

Wedgwood argues that young people were not getting the most out of their education. Or, perhaps more truthfully, that society was not getting the most out of its youth, and in particular what he called those who would grow up to be its ?superior characters.? He lamented ?How many hours, days, months have been prodigally wasted in unproductive occupations! What a host of half formed impressions and abortive conceptions blended into a mass of confusion . . . hours every day passed in reverie, thought ungoverned, undirected.? Wedgwood was clearly not a fan of daydreaming! 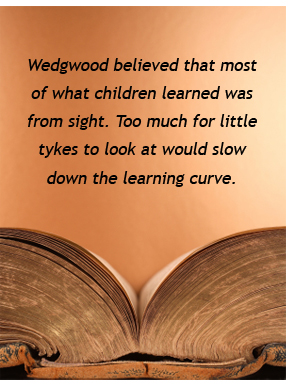 Wedgwood wished to create a ?rigorous, rational, closeted system of education.? His goal was to maximize the prevalent belief of the science of his time, which was that the mind was essentially a blank slate at birth. This perspective stemmed from the philosopher John Locke and his concept of ?tabula rasa.?

As a ?white paper, void of all characters,? the pupil’s brain seemed logically to need ?a careful management of perceptual input? in order to maximize the efficiency of later intellectual output. The mathematics seemed perfect and, in an industrializing society, the optics were also good. The efficient production of little geniuses seemed like a superb idea!

Wedgwood believed that most of what children learned was from sight. Too much for little tykes to look at would slow down the learning curve. He believed that pupils should be taught ?in laboratory conditions so that the infant’s sensory development would not be overloaded by random and meaningless data.? Wedgwood wrote that ?plain grey walls? would minimize distractions and that on account of nature’s abundance of stimulation, ?the child must never go out of doors.?

Today Wedgwood’s rationalized schooling sounds so preposterous. Even back in the 1800s a poet named Wordsworth, who Wedgwood had hoped would manage his new facility, was horrified by the prospect of pupils being kept in isolation chambers. In strong language for the 19th century, Wordsworth responded that ?The Guides, the Wardens of our faculties / . . . Sages, who in their prescience would control / All accidents, and to the very road / Which they have fashion’d would confine us down / Like engines.? An effective paraphrase might be provided by the rocker Marilyn Manson, who sings ?Isolation is the oxygen mask you make your children breathe in to survive!?

Wedgwood and Wordsworth each had very different perspectives on cognition. For Wedgewood the senses produce maps of the world and ?every perception of the object leaves behind it an idea which instantly coalesces with the subsequent perception.? In other words, we build an image of the world according to what we see. Wedgwood was very visual-oriented and even invented an early prototype for photography. His view of perception was simplistic, however, and contrasts sharply with how young people actually experience the world.

Wordsworth probably better expresses the way it feels to be a child and to learn. His poems, rather than producing what Wedgwood called ?a chaos of perceptions,? create what theorists Gilles Fauconnier and Mark Turner call ?blended space.? Wordsworth’s ability to write of a river as a living being who can ?blend his murmurs with my nurse’s song? and ?intertwine my dreams? reflects the way young students experience the world.

Whereas Wedgwood thought that we build our consciousness up slowly block by block, Wordsworth knew intuitively (and against the grain of common sense of his time) that young people have an uncanny ability to merge ?inputs from two perceptual domains? and understand the world as a mixture of reality types. The imagination itself, seen as a decoupling of reality from the mind, serves to increase understanding of the world and, in an irony that Wedgwood did not anticipate, leads to all kinds of scientific breakthroughs otherwise known as epiphanies.

Had we in the seventh grade known what type of classroom we might have experienced had Wedgwood been in charge, we probably would have been grateful that only our minute of arrival was scheduled, and not every moment of our waking lives. Along with the Industrial Revolution came a revolution of world view that, thankfully, did not totally win out in the field of education. Although, to ask many students today, school does at times seem like an overly mechanized, even dehumanizing, experience!