Articles
The Voice
In Conversation With . . . Scott Lanaway

Scott Lanaway is a Toronto-based singer-songwriter known for his experimental approach to creating layered, atmospheric songs with lyrics that display a wealth of quirky insights into the human dilemma. After recording Answering Machine Diaries in 2006 he released Mergers and Acquisitions in March of this year. Recently he took the time to discuss his music and ideas with Wanda Waterman St. Louis.

I started loving music from a very young age. When I was four I got a Mickey Mouse record player that could play 45s and LPs. So my earliest experiences were The Police, Kiss, Petula Clark’s ?Downtown,? and the theme song from a show called The Wombles. One day Robbie Connor brought over the Beatles and blew my mind.

In school I learned to play a baritone (euphonium). In private I taught myself guitar and bass by playing along with records. I can find notes by ear and it allows me to put together the chords and layers that I hear in my head. I’m no ace, but I can get where I want to go.

What It Takes to Impress Me

I’ve found as I’ve gotten older that it takes a lot to impress me when seeing someone live. Two recent examples of feeling truly elevated by live music were watching Phoenix a few months back, here in Toronto, as well as Broken Social Scene. I did see Radiohead before they were anybody at a small club in Montreal, and I was blown away despite what anyone says about their earlier music.

Music is very personal to me so I would say I’ve had more mesmerizing experiences on headphones or in cars (especially at night), absolutely sinking in to music, hearing everything, and being blown away. John Lennon, Sonic Youth, Interpol, Richard Ashcroft?there’s so much music that has mesmerized me I couldn’t list it all here. 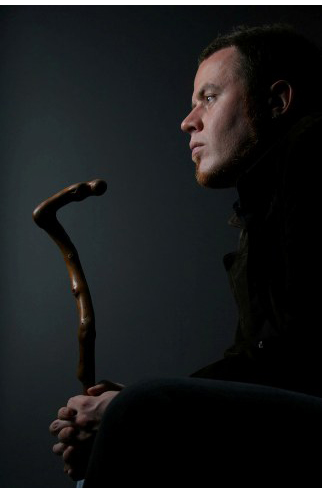 Where Did You Grow Up?

I was born in Willowdale. We moved to England and then moved back when I was four (I had a Cockney accent which I desperately tried to hide). I lived in Aurora and then moved to Toronto when my mum and dad leaped through the big D. I lived in Montreal for four years while I went to McGill.

I think there’s a special axis of mood, logistics, and surroundings that cannot be faked. For me it just starts to happen?melodies, ideas, progressions, and layers. I need to feel inspired enough and to have time as well as the right space (I share a studio with a friend in the east end That’s a great space to create in). I used to use my phone answering machine to record melodies, lyrics, and rhythms. Now I might use my iPhone to help me remember an idea. Funny thing is, I hardly ever access those bits; usually when I’m in the studio other ideas take centre stage.

The creative life has helped me cope with myself a bit better. I don’t think there’s anything else I do that feels as authentic to myself.

I like films like Blade Runner with its magnificent, atmospheric score by Vangelis. (Actually I’m attracted to movie scores; I sometimes buy a soundtrack before I see the film).

I love reading about real people?I get that from my mum. For instance I read biographies of Federico Fellini, Orson Welles, John Lennon, D.H. Lawrence, and others who’ve influenced me. Right now I’m reading a tome about the fall of Berlin in 1945. Album-wise, some of the biggest ones have been John Lennon’s Plastic Ono Band?I had never heard someone express themselves so personally and the music sounded stark and powerful (with amazing bass high in the mix).

And Dark Side of the Moon of course. But there’s so much modern music that inspires me. It’s really exciting to hear people pushing creatively and taking chances, as opposed to intentionally sculpting something that would be the most easily palatable from a commercial or even a street-cred perspective.

Tell Me About the Song ?Oprah, God Wants You to Have a Private Jet?

I had heard her say something I found a bit repulsive about the benefits of having a private jet, and was thinking about suffering, poverty, illness, death. And how rich people seem to think that if they give what is a comparatively large sum to address some of these issues, then they have earned the moral right to enjoy the opulence of their wealth. But the kicker for me is when ?God? is invoked, i.e., God must want me to have these things so that I can complete God’s intended mission for me to change the world (or win an Academy Award, or a sports trophy, or whatever it is). She is genuinely transformational, and has done a lot of good, but I think she might drink her own Kool-Aid a bit too much.