Features
The Voice
Who Are the People in Your Neighbourhood?

Tell me, who are the people in your neighbourhood?

I remember singing that song with my son in the mid-1990s. We sang about all sorts of people we met on the street: letter carriers, police officers, teachers, and bus drivers. If we sang that song today, we could add the lady panhandling at the corner and the kid sleeping next to the curb.

Out of curiosity, I searched the word ?homeless? at Sesame Workshop and although it came up blank, to their credit, Sesame Street has an ?Initiatives? page with a section devoted to well-being that includes the piece ?Coping with Economic Difficulties.?

In Canada, our current economic difficulties have led to a rise in homelessness. According to Statistics Canada, ?in 2006, an estimated 24.9% of all households spent 30% or more of their income on shelter, up marginally from 2001. Those who spend 30% or more on shelter may do so by choice, or they may be at risk of experiencing problems related to housing affordability.?

Gordon Laird, Media Fellow Emeritus for the Sheldon Chumir Foundation for Ethics in Leadership, and author of “Homelessness in a growth economy: Canada’s 21st century paradox,” writes that ?Canada’s ?new homeless? can be found everywhere?towns, cities, suburbs.? In fact, according to Laird, ?one in five renter households in Canada spends more than 50 per cent of their income on shelter.?

Think about that for a moment. Imagine spending half your income on shelter and the other half on the rest of life’s needs?things like childcare expenses, clothing, debt repayment, food, insurances, medical and dental costs, school expenses, transportation and, of course, taxes. 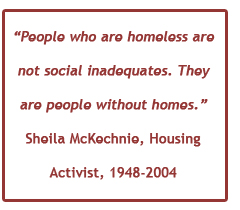 I find it notable that Sesame Street has supportive initiatives to help families during tough economic times, whilst our current Conservative government has allowed child poverty to worsen under its watch. According to the Canadian Council on Social Development (CCSC), Stats and Facts on poverty, ?approximately 3.5 million Canadians were living in poverty in 2004?more than 11% of the population.? As well, 865,000 Canadian children under the age of 18 lived in poverty in the same year?one of every eight children.

To break that down into relatable terms, according to the Ontario Ministry of Education’s class-size tracker, primary classrooms in Ontario currently have 23 students. This means, rounding up, that three students in every primary classroom in Canada now live in poverty (the actual figure is 2.875).

In an effort to learn more about ways to advocate on behalf of the homeless, I recently spoke with Laird Eddy, Director of Mission Services at The Ottawa Mission. For 17 years Mr. Eddy has dedicated himself to ameliorating the lives of homeless men in Ottawa.

What do you believe is the single biggest misconception Canadians make about the homeless?

There are many misconceptions about homeless people. I think one of the biggest is that the homeless have caused their own situation. Economic factors, mental or physical illness and many other problems in life, issues that are often beyond our control, can lead to homelessness.

What advice do you have for emerging advocates who want to confront homelessness in their own communities? 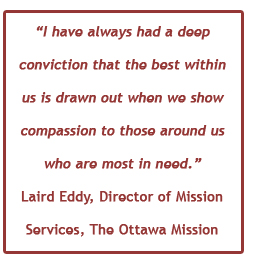 What are some simple ways to help the homeless in our midst?

Coordinate a fundraising event or a donation drive for your local homeless shelter. A simple thing like collecting socks, underwear and other everyday items for a shelter can inspire hope and dignity, particularly at a time when some have very little.

Can you recommend some strategies that students can undertake to raise awareness concerning the issue of homelessness in Canada?

Nothing is as effective as seeing the problem with your own eyes. There are many simple ways student can help. Get a group of people together to volunteer at a local homeless shelter, or collect donations and personally deliver them to a shelter. Through these types of experiences and talking with people staying at shelters, people become aware of various needs and get involved.

The most enjoyable aspect of my job is watching the hope return into the eyes of someone who has lost everything. I often see this when people realize that someone truly cares about what happens to them. The most difficult aspect of my job is when someone new walks through our doors. It means that circumstances in life have overwhelmed them with grief of some kind to the point that they are now homeless.

If you had the ability to instantly fix one piece of the homelessness puzzle what would it be and why? 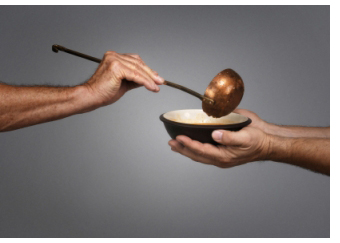 What are you most proud of in terms of The Ottawa Mission’s advocacy around the issue of homelessness in Canada?

I am most proud of the fact that we have been able to provide the kinds of programs that are life changing for people. Our programs, which include our hospice, medical clinic, school, job training, addiction rehab and housing assistance all work together to provide opportunities for people to change their lives for the better.

As Mr. Eddy has revealed, advocating on behalf of the homeless can be as basic as collecting and donating sundry items to a shelter, or it can be comprehensive as spearheading a fundraising initiative in your own neighbourhood.

They are the housed and the homeless. And I know you see both. 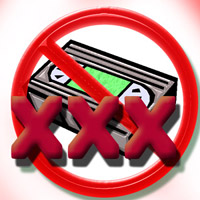