After several wasted hours, I realized that the movie I had chosen to recommend this week, a movie that had shown so much promise in its first hour, was turning out to be such a putrid gym bag that I couldn’t possibly recommend it to my readers. And I had nothing else on my desk. And the deadline loomed.

Today, what should arrive in the mail but one of the most significant albums I’ve heard this year. Yes, God takes care of fools and children!

Cybiont is this guy in New Zealand who does some pretty engaging stuff with music. In the noble tradition of Devo, he has based his oeuvres on an evolution-related theory, and in his case the theory is not quite as cockamamie as that on which Devo was founded. Angels & Demons is his second album. 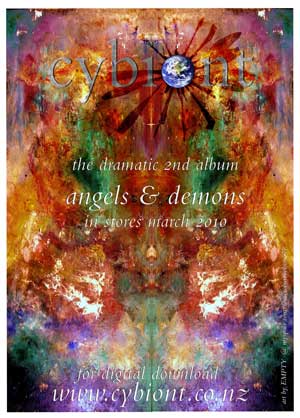 At first listen, the musical nods and allusions seem like a pile of musical rubble left over from the condemned edifices of Tom Waits, David Pritchard, Steve Reich, Kurt Weill, The Velvet Underground, and Kraftwerk, among others. Call it post?dance-ambient-industrial-electronic-experimental-rock-noir if you will, It’s simply a really good listening experience, full of substance and originality.

As T. S. Eliot proved, a bricolage is not always an assortment of borrowed elements haphazardly piled on top of each other, but can be a means of making sense of chaos, of drawing chaos into the realm of the imagination in order to plumb its meaning. Collecting aesthetic tidbits from multiple sources, a kind of cultural pack-ratting, can, in the right hands, become something as fascinating and enriching as Angels & Demons.

Cybiont sings in a deeply expressive and resonant voice, and his accent (the question of whether or not this is an artistic flaw just adds to the fun) gives it that surreal Weimar touch.

The name ?Cybiont? emerged from the teachings of French thinker Joël de Rosnay, who hypothesized that the next (or imminent) step in evolution is the formation of a massive brain in which humans function as neurons and in which, to paraphrase, technology and nature serve as glial cells. And yes, trying to get your head around this can aid your appreciation of many of the lyrics here.

And That’s just the beginning.