Articles
The Voice
In Conversation With . . . Janet Klein, Part I

Janet Klein is a Los Angeles-based performing artist who has so mastered the art of living in the past that It’s hard to separate her everyday self from her glamorous stage persona. She has amassed an international cult following, singing little-known songs of the 1910s, ?20s, and ?30s in period dress with all the mannerisms you’d expect of a vivacious between-wars chanteuse.

On the Way to Nicer Places

My parents were students at UCLA. I was a little bit of a love child?I came a little early. Then they got teaching positions in the Inland Empire, so I grew up in San Bernardino, California. It was mentioned in the ?Route 66? song, but It’s a town you’d pass through on the way to other, nicer places. I always say that it was a good place to be an escapist.

San Bernardino was beautiful a century ago, part of the whole California dream; it was at one time all orange groves. There was a beautiful downtown, a Carnegie library. One of my favourite places was the Sycamore Inn in Cucamonga. It was the fanciest place I knew as a kid growing up. you’d go to this place and it looked like a lodge, like a mountain lodge. From the front room, you’d enter and there’d be all this taxidermy and a big fireplace.

The place was built as a carriage stop in the 1800s, and they’d let you in through these double doors into this wonderful room that was all red brocade wallpaper. They had wingback chairs, moustachioed waiters, and the sycamore tree actually growing into the building. They had this beautiful green-rimmed china.

Anything old was a window into another world. And That’s where I wanted to go. 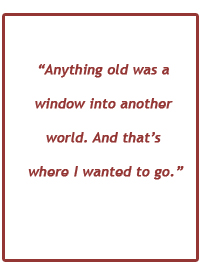 Bumping Off the Road of Discontent

And why not? Everything had just been so built up in San Bernardino. And it keeps getting worse. For me, the idea of ?newer is better? just does not compute. Basically I bumped off the road of my discontent, trying to find what I did like, because there were so many things around me that left me feeling unhappy or like a Martian.

I seem to have the taste of an old lady. It took years to figure this out. But I kept at it and stayed with the things that I found pleasure in. Eventually, it completely took hold and I felt like, Hey, now I can draw others into my bubble! I had been hoping that other people could somehow join my sensory time warp.

I had an interesting family. I spent a lot of time with my great-aunts, I knew two of my great-grandparents, and I was close to my grandparents on both sides. I loved the objects in their homes, the old photographs and things, and I needled them all for stories about the past. I always wanted to hear stories about where they came from.

My grandmother and her sisters were from Poland, and I just loved their sensibility; they were very elegant and also very practical. 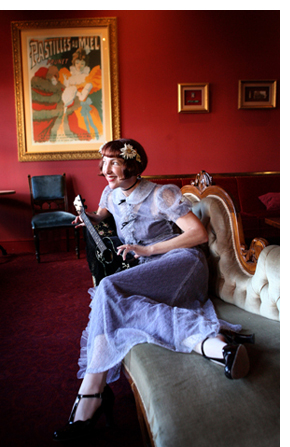 They were Depression kids, so they never wasted anything. They were great cooks and great seamstresses.

My great-grandmother Mary was very salt-of-the-earth. She had a crooked smile because she’d had an ear infection as a young woman and wasn’t treated properly when she lived in the Jewish ghetto. When she recovered, half her face was paralyzed. Everything in Grandma Mary’s home was old-world. That’s how I came to the conclusion that I had the tastes of an old lady?I loved everything in Grandma Mary’s house!

They were all good seamstresses and they taught me how to sew and knit and things like that. And at the same time, my grandmother was very elegante. When you’d open up the closet in her bedroom, it was like a fantasy world. She had these fantastic flowing gowns. The first time I saw them, I just couldn’t believe it; I asked her, ?Where did you wear these things??

?Janet,? she said, ?We used to go out dancing formal three times a week.?

She’d tell me about all the nightclubs they’d go to in New York and Los Angeles. Most of the stories drew me back to New York in the ?30s.

My grandfather on the other side was a professional magician, and my grandmother was his assistant. I have promotional photographs of his act and some film footage and other things, and that captivated me.

My father was a painter and an animator and had a great music collection. So I had a lot of interesting things going on at home, and I grew up thinking of myself as an artist. I loved music and I collected things and exchanged notes with my dad. We’d listen to music every night.

Beats from the Basement—Janet Jackson