Features
The Voice
Battling Your Muse 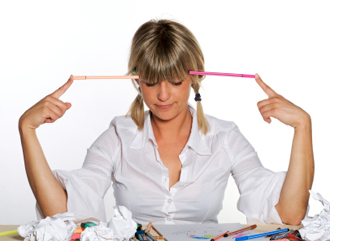 Writing coaches advise their students to gently and deliberately facilitate the flow of ideas. we’re encouraged to maintain a level of openness to inspiration, to cultivate our surroundings so that they’ll bear rich fruit. To handle inspiration with care. To ?fondle our muse,? so to speak.

Apparently, they haven’t met my writing Muse. She needs a firm hand, not kid gloves. I’ve long suspected that I’m not equal to the task.

When I first began writing, I assumed that the Muse and I would maintain a certain professional relationship. My job would be to write, and hers to provide the story behind the story. She would remain my devoted assistant, the inspiration behind my big plans, the hardworking backbone that would give my writing strength and stamina.

Unfortunately, my Muse is highly ambitious. From very early on, she made it clear who should be running the show. I was ten typing fingers doomed to anonymity; any talent was her exclusive domain.

Witness, for example, this article. I started out on an entirely different tack, but the Muse refused to entertain my wishes, and began directing the piece as she herself saw fit. Now normally, a little bit of inspiration is never a bad thing. But what do you do when inspiration tries to overthrow common sense, personal boundaries, and the strictures of time, place, and duty?

Well, you can try to throw up fortifications. You can seek out boring environments, like the kitchen table (the Muse starts your mind thinking about articles on the condition of your refrigerator) or the bedroom (the Muse reminds you of the benefits of sleep).

Then you try to shake her off your tail by bringing your writing elsewhere. The coffee shop, the outdoors, or the art gallery: these are hotbeds of inspiration on their own. In such an environment, surely no muse is needed to unlock the wells of creativity deep inside!

I set up my laptop amidst the sunny bustle and cooling breezes of an outdoor coffee shop. Surely, here, at last, self-made inspiration will hit? But it appears as though I’ve failed again. Far from being subdued, the Muse is in her element. People, places, sights, sounds: how can she contain her excitement at the literary possibilities? Becoming frustrated by the blinding montage of thoughts and ideas thrown at me by my Muse, I move my laptop to the sterility of a doctor’s waiting room.

My mind is at peace. I think that I’ve finally prevailed, and miserably contemplate a life spent writing in doctors? offices and hospitals while I settle down to work.

Then the receptionist picks up the telephone, and a broad smile spreads over the Muse’s face. It pains me to admit that my Muse is a nosy gossip, but It’s true; she simply lives for others? stories, and the more dramatic, the better. My work is left neglected as she eagerly listens to the details of the receptionist’s recent divorce. By the time the Muse decides to mind her own business and let my creativity flow, I’m called back to the examination room, where the Muse stores away medical knowledge that I don’t even understand.

If I ever write a novel about a recently divorced woman with strange medical issues, I’m covered. I suppose I should be grateful, but I’m not so inclined, particularly as the deadline looms and the Muse is focusing on Chapter 1 of her latest foray into fiction instead of the article I’m supposed to be writing.

It gets worse. The Muse is fickle, fragile, and prone to sulks. If I neglect or insult her, she’ll give me the silent treatment, and my computer screen will remain empty while my frustration level elevates and the Muse snickers over my shoulder at my predicament. Experts call it ?writer’s block,? but It’s more like ?writer’s blank.? For a delicate creature, the Muse is very talented in the art of revenge.

We certainly have our problems. Despite our differences, though, I’ve secretly grown to enjoy the vigorous back-and-forth arguments that form the core of our writing sessions. And although she usually navigates my reluctant tap-tapping fingers down vague paths and along uncharted waters, the Muse’s sense of direction is keen. I might disagree with the route She’s chosen, or even the destination, but I have to hand it to her. For all her inconsistencies and mind games, the Muse seems to know what she wants and where She’s going with it. She got me to the end of this article, didn’t she?