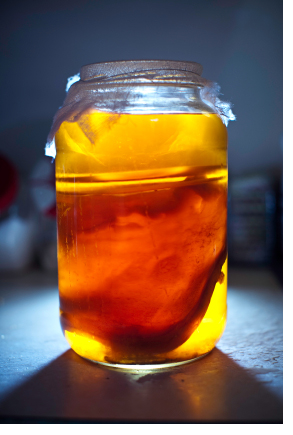 A co-worker gave me a jar of kombucha tea and it looks pretty weird ? almost like It’s not safe to drink! What is kombucha? She said It’s a mushroom with amazing anti-cancer benefits. Is this really true?”

Recently, there has been much interest in kombucha in the natural health world.

And You’re right, it really does look weird! This is because kombucha is actually a fermented product, a conglomeration of acetic acid bacteria and yeast. From a scientific standpoint, It’s not a true mushroom, although It’s often referred to as one.

Essentially, the original kombucha culture, called the ?mother culture,? is grown in a black or green tea base, covered with a cloth, and allowed to ferment. The acetic acid bacteria in the culture ferments in the same manner as the apple cider vinegar that you use in cooking. After one to two weeks, depending on the temperature of the fermentation area, the kombucha culture will be mature. Once It’s mature, you can sample off a ?daughter culture,? and either consume it or use it to start a new culture. The daughter culture is probably what your co-worker gave you.

So where does this unusual drink come from? The history of kombucha is uncertain. Some claim it originated in Russia, as a fermented tea drink similar to the Russian kvas. Others say it was first made in China, years before the popularity of regular black tea. (Note that the Japanese also have a tea called kombucha, but It’s entirely different; It’s made from seaweed.) Regardless, it was traditionally believed that those who drank kombucha had the chance to live forever, or at least live longer.

What’s it made of? Scientific analysis has revealed that the main ingredient is acetic acid (vinegar), complemented by a host of other organic acids, including malic acid (found in apples), oxalic acid (found in rhubarb), enzymes, and B vitamins. 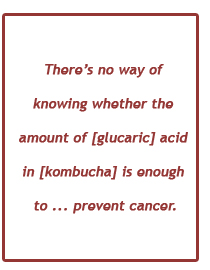 Kombucha’s health flag began flying when people noticed changes in liver and kidney function after drinking the tea. Why? On a daily basis, your liver is busy filtering your blood and eliminating toxins by breaking down hormones, drugs, and other chemicals. Studies show that kombucha contains glucaric acid (also found in many fruits and vegetables), which helps the body break down the by-products that the liver produces during the detoxification process.

Currently, there’s simply not enough published research on kombucha, glucaric acid, and cancer to be able to say anything definite.

Is it safe to drink? Probably. If the culture has been grown properly, there seem to be few documented negative health effects. One study did claim liver problems in rodents following kombucha supplementation, but other studies didn’t find the same results. Unfortunately, kombucha is a natural health remedy that hasn’t been studied accurately, or in enough detail. However, since it is a fermented food, and if the kombucha sample is uncontaminated, the fact that the drink is fermented may have a positive effect on digestive issues, such as gas and bloating.

A warning, though: the culture must be grown properly. Otherwise, you need to be concerned about contamination from mould and other spores. If you attempt to grow your own kombucha culture from your co-worker?s, you need to ensure that the pH of the liquid remains acidic (below 4.6). Less acidity (in other words, a higher pH number) means there is a greater chance of contamination spoiling your kombucha. 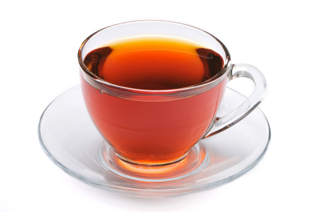 Kombucha that is spoiled will often be black, green, or blue in colour and may have mould spots on the surface.

Stay tuned to discover the next current health fad … and, of course, whether you should incorporate it into your lifestyle!

How Not to Commit Suicide