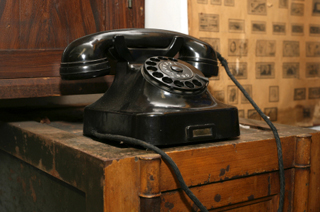 This coming Tuesday marks the 134th anniversary of one history-making telephone call: on August 10, 1876, Alexander Graham Bell made the world’s first long-distance call from Brantford, Ontario, to Paris, Ontario. Land line-based telephones have been a part of modern life for so long that It’s easy to take them for granted. This week’s links connect us with some of the background behind this everyday necessity.

Have you ever wondered how your voice is transmitted through a traditional land line phone? This short video from the Science Channel explains the basics behind the process. You’ll never think of a phone conversation in the same way!

Think area codes were assigned randomly? Think again. Here’s a brief history explaining the rationale behind the original assignments of those three numbers.

This photo gallery, an online accompaniment to the PBS series American Experience‘s feature on the telephone, shows the evolution of telephone design. From the clunky wooden boxes of the early days to sleek, modern cordless sets, It’s come a long way!

Everything Old Is New Again

Telephone technology has come far, but it hasn’t forgotten its roots. This YouTube clip shows an iPhone app which allows users to turn their smart phone into an old-fashioned rotary-dial telephone.