Columns
The Voice
Gregor’s Bed – The Cybiont Interview, Part I

Cybiont is a New Zealand recording artist with astonishingly innovative lyrics and sounds. He recently took the time to talk with Wanda Waterman St. Louis about Gaia theory, collectivism, and mindful listening. Be sure to check out The Voice‘s review of Cybiont’s second album, Angels & Demons.

?The great challenge of the future will not be technical, it will be human.?

[De] Rosnay’s book The Symbiotic Man caught my attention about 10 years ago. It had a very inspiring title acknowledging us as interdependent beings and showing how everything is connected. By no means can we call ourselves independent; we depend on everything around us, and above all else we are social beings, highly dependent on others in our quest for a good life.

In these times of individualism, I’ve many times used this book to inspire to promote collectivism. Apart from change, collectivism might be the most significant human tradition ever. [De] Rosnay’s book gives some inspiring viewpoints on attributes, values, etc. that may be pivotal for a civilization of symbiotic human beings.

Lovelock’s Gaia theory taught us that all are connected in this ?web of life.? Rocks, plants, animals, and humans all constitute . . . nature. Gaia is a living planet. Joel de Rosnay brought the concept further by including technology and human-made networks into the equation. Non-linear science tells us that ?the total is bigger then the sum of all its parts.? The ?cybiont? is [De] Rosnay’s bid on the next evolutionary step for the planet earth.

I am grateful to have had [De] Rosnay’s ideas to use in my bag of tools during my years working towards a better world. It has also contributed to the understanding that for our (Homo sapiens) existence it might be important to sustain life in the future.

For me, James Lovelock’s Gaia theory firmly placed humanity within nature. It resonates kindly in my ears to be part of it all and not one of nature’s mistakes, a ?cancer growth? that the planet would be better off without.

I actually find it a nice opportunity to be alive and I find our human intelligence interesting. What if we are not being here to destroy life on earth? Biological life seems to be a rare occurrence in the universe; maybe we’ll have chance to make sure that this wonderful occurrence will continue to live on beyond the life of the planet.

I usually listen to the ones speaking from their hearts, be it a person, a talkative bird, a piece of music, or some artistic lichen formations. ?Everything got its own sound?open your heart and it will be all around? [from Cybiont’s single, ?Sounds?].

Some pieces and artists that have made a long-lasting impression are Carl Orff’s Carmina Burana, Zorba the Greek, Nick Cave and co., Joy Division, freedom songs (especially from South America and Africa), Einstürzende Neubauten, and more. I think my latest CD purchase was Rowland S. Howard’s final album.

I Don’t Read Much

Stopped paying attention to newspapers years ago, and few books have been able to keep my attention from cover to cover. At times I get into reading and mostly tend to read science-based books. Last one read was Michio Kaku’s Parallel Worlds, taking you through string theories, quantum physics, and more. This was another book that influenced some of my new songs, such as ?Sounds? and ?Dreams Running Out.? 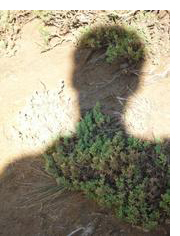 Occasionally I get drawn into the books of Alexander McCall Smith’s No. 1 Ladies? Detective Agency series, fantastic stories reminding you of the goodness in people, giving a warm feeling around the heart.

In contradiction to what we tend to learn as kids, I love speaking to strangers. I’ve never been properly socially trained to avoid talking about topics I believe are important in the world of today. I’m incompetent at chit-chat, but I love passionate discussions about the earth, universe, politics, collectivism, time bending, what we can learn from bacteria, and so on. I love to talk to birds as well, and yeah, last week I found myself in a conversation with a bean plant.