It was a pretty exciting chain of events that got started in the 1600s, wasn’t it? You know, back when technology levelled the playing field of the written word, making it something for rich and poor alike.

From Gutenberg to railways to public libraries, it sparked a glorious mash-up of developments that let everyone get into the game, whether they wanted to discover the classics or devour the latest headlines. But today, as technology races onward, taking faster and sharper turns, I can’t help wondering: will the cool new digital advances split readers into haves and have-nots once again?

It sounds a little alarmist until you remember that the revolution in reading was all about access. Alongside political and religious shifts, mass production meant books gradually became as common as table salt. Kids could buy comics with pocket change. Libraries lent everything from bestsellers to magazines for free (and still do). It wasn’t hard to find heaps of used paperbacks for a quarter, or even a dime, apiece. Information and ideas flowed freely, and so did innovation.

So how can the shiny new digital world limit people’s access to books and magazines? After all, ordering a copy of the latest Stephen King novel is as simple as clicking a few buttons on your screen, and there’s no end to free online news sites.

The problem is that all this digital content has added a layer that didn’t exist before. There’s plenty of interesting stuff to read, but increasingly, you’ve got to have a machine to read it with.

Take e-books. they’re fabulous things. They save trees, are fast and easy to download, and you can carry a gazillion of them around with you. (Well, okay, but it feels like a gazillion, doesn’t it?) Unless, of course, you can’t afford that expensive machine to read them on.

But wait, you say. E-book software works on personal computers and smart phones too. And It’s free! Yes it is?but that still won’t do you much good if You’re one of the millions of North Americans living below the poverty line, in a household where smart phones and laptops are an unimaginable luxury.

For now, access to paper books remains simple. But think a digital-only future is the stuff of fiction? Some publishing insiders predict hard-copy new releases will vanish as early as 2015, with publishers moving to digital-only formats. In fact, Dorchester Publishing announced a similar move just last week.

And e-books form only part of the divide. With more and more ?paper? book sales moving online, even giants like Barnes and Noble are feeling the digital heat. On August 3, the mega-retailer’s board announced its decision to put the company up for sale (part of a larger strategy, wrote The New York Times, to focus on ?the growing digital side of the business?).

Once again, it throws an extra barrier between reader and words. If you want to buy a book?at least from Amazon or Chapters Indigo?you need a computer (though some online bookstores still let you order by phone). 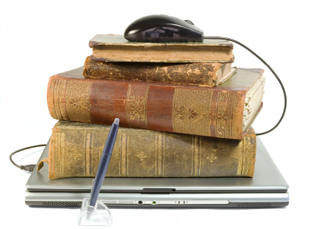 So should we halt this move into the digital realm? Of course not. There are far too many benefits, including text-to-speech and extra-large fonts for readers with vision loss.

But we can’t forget that crucial element of the reading revolution: access. If books, magazines, and newspapers revert to the domain of the wealthy, it will curb the potential of society as a whole?the last thing we need in this information age.

Eventually, prices will come down, and you’ll find e-readers on sale in the bargain bin. Until then, though, we need to support ideas and programs like this new one at West Vancouver Public Library: on July 12, they became the first library in Canada to let people borrow e-readers.

With major public access systems like the Toronto Public Library offering more and more content in digital form, It’s vital to keep those lines of access open for everyone. Because gaps between rich and poor have always existed, but the joy of reading?and the availability of information?shouldn’t be among them.

The Future of Technology