Because writing’s easy, isn’t it? A simple matter of plunking words down on a page or posting them to your blog. Anybody can do it?even that apocryphal room full of monkeys who’ll eventually turn out Shakespeare’s corpus.

That’s the assumption behind several requests I’ve received over the past couple of years: requests from people who’ve decided they’re going to earn a living by writing and want to know where to sign up. As if, somehow, I can just point them to the lineup and say there, over there. Grab a number and wait for someone to call your name. The cheques will come rolling in shortly.

Not that I blame them for asking. And I don’t even mind taking the time to put together an answer, one that goes something like this: first, spend years reading everything you can get your hands on. The Grapes of Wrath. Cereal boxes. Mass-market dross. Read obsessively, until you can instinctively separate the crap from the crown jewels. (And genre doesn’t matter, because there’s a lot more quality on offer in Rita Hayworth and Shawshank Redemption than in some of the ?literary? stuff I’ve slogged through. And believe me, I love the classics.)

While You’re at it, start writing. Sit in your chair and stare at the blank screen until it feels like the 12 decent words you’ve managed to drag onto the page that day have been squeezed through your eyeballs, spiky little serifs and all. Then, when You’re sure your literary brilliance is ready for the world, you’ve got a choice. Throw it away and start again (knowing that the first million words really are just practice) or take the plunge and submit it.

And That’s usually when the would-be writer sends a reply. A polite but frosty voice saying thanks for raining on her parade, and she’ll go away now and think about a career in law. Or, conversely, one insisting there’s got to be a faster way, a strategy that doesn’t involve weeks of practice, never mind years, before It’s time to start cashing in.

The truth is, there’s not. Not unless You’re a megastar like Paris Hilton or Justin Bieber and publishers are clamouring to pay multimillion-dollar advances for your life story. Even Ernest Hemingway started by working as a newspaper reporter for many years (from the age of 17).

But for the average person who wants to earn a living with words, It’s important to remember that good writing doesn’t just fall out of the sky. In particular, neither does master writing, the kind of writing that begins, ?It was the best of times, it was the worst of times . . .?

Getting good at writing takes time. It takes patience. It takes a whole lot of building and throwing away and building again. It’s like mastering any other craft?say, carpentry.

Given a hammer, some nails, and basic instructions, I’m confident I can knock together a kitchen table in a day. It won’t be pretty, but it will have four legs and hold up your scrambled eggs and coffee in the morning. The question is, should I really expect anyone to pay for it? 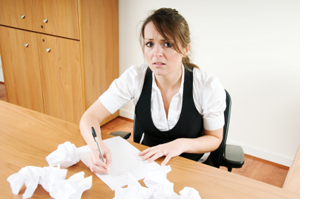 Writing’s much the same. Blogs and self-publishing are fine. It’s fabulous that ideas can now flow so freely among so many people. But perhaps That’s what makes would-be writers expect someone will pay for their first wobbly tables. With the tools ready at hand, like a glut of literary jigsaws and lathes, It’s assumed that the craftsmanship comes just as easily.

To which I say: plenty of folks enjoy whacking nails into wood as a hobby. That doesn’t mean they can earn their living as a carpenter.

So next time someone asks about paying the bills as a writer, I’ll tell him It’s rewarding. That It’s one of the most fulfilling careers I can imagine. That if he’s serious, he should start working toward it right away and not let anyone or anything dissuade him.

But the one thing I won’t do is tell him It’s easy.