News & Events
The Voice
International News Desk – At Home: Driving in Cars with Cannabis – Around the World: Mini-Moon

At Home: Driving in Cars with Cannabis

Hemp?the plant family That’s the source of marijuana?is manufactured into many other products, including food and clothing. But recently, several Canadian companies, university students, and the province of Alberta have been collaborating on an entirely different use: an electric automobile whose structure is composed of the plant fibres.

As the CBC reports, the battery-powered Kestrel, made from an ?impact-resistant composite material? composed of Alberta-grown hemp, will be tested later this month. The car will be able to reach speeds of 90 kilometres per hour, and its battery should last between 40 and 160 kilometres ?before needing to be recharged.?

The Kestrel’s manufacturing process is being hailed as much more energy-efficient than that of other light cars, like those composed from fibreglass composites. While these involve ?intense heating in furnaces and multiple chemical processes,? the hemp needed for the Kestrel only requires ?the energy of the sun? and ?doesn’t require much water or pesticide use.?

An ecological innovation? Maybe not. Building hemp-based cars isn’t a new concept: over 50 years ago, ?[a]utomotive pioneer Henry Ford first built a car made of hemp fibre and resin.?

But don’t worry about driving under the influence of the fibres. Although certain strains of hemp contain tetrahydrocannabinol (THC), the component that creates marijuana’s effect, ?industrial hemp is bred to produce very little THC.?

Around the World: Mini-Moon

For centuries, the moon has been a seemingly unchanging fixture in the night sky. However, recent research suggests that the moon hasn’t always been the size it is now?and that It’s still getting smaller.

As the National Geographic Daily News reports, ?the moon has been shrinking? for years, and it may continue to do so.

Recent photos from NASA’s Lunar Reconnaissance Orbiter show widely scattered geological formations called lobate scarps, which are staircase-shaped and which ?form when land on one side of a geologic fault line is thrust upward.? Scientists believe that the moon’s shrinking caused the crust to buckle, creating the scarps.

But It’s the condition of the scarps that are the most mind-blowing discovery. Because they are in a ?pristine state,? scientists suggest that they were only recently formed, meaning that ?the moon got cool enough to begin contracting only recently.?

Studies ?estimate that the moon’s width has shrunk by about 600 feet (182 meters)? so far. And it may not be finished. Previously, scientists assumed that the moon had finished the cooling and shrinking portion of its evolution long ago. Now, however, they believe that it ?may still be shrinking.? 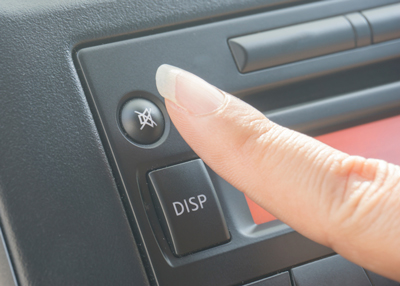 Tune Off to Tune In

From Where I Sit – What Are You Doing Behind the Wheel?