Articles
The Voice
In Conversation With . . . William MacGillivray

William MacGillivray is a notable Canadian filmmaker and director of The Man of a Thousand Songs, a new documentary on Newfoundland singer-songwriter Ron Hynes (check out the Voice review of Hynes’s self-titled CD). The film will be opening at the Toronto Film Festival on September 13 and will be shown at the Parklane Mall in Halifax at the Atlantic Film Festival on September 19 and 20. MacGillivray recently took the time to talk with Wanda Waterman St. Louis about Ron Hynes as a film subject.

Why a Film About Ron Hynes?

First of all, I’m a Newfoundlander, and there’s a kind of elemental appreciation of Ron’s language and his musicality, which although Ron has made it his own is still part of that 500-year history of storytelling. So It’s that, but It’s also the fact that anybody who has sat in a room with Ron and listened to him perform his music is moved beyond mere entertainment.

I’m a few years older than Ron and I had left Newfoundland before Ron came on the scene. But of course my family is there and I go back all the time . . .[A]lthough obviously I knew about Ron, it wasn’t until about four years ago that I actually sat in a bar and listened to him play. I was really struck because it was a noisy bar and Ron just commanded the space.

I’m hoping that the film is as much a dialogue as a statement and that people will find in it things that mean something to them. That’s what we try to do with all our films; we try to make them open and not closed. I had hoped that people would walk away from this film having experienced as much as possible a three-dimensional character on a two-dimensional screen, that they’d sense who Ron is, what he has struggled through to get to where he’s going, and hopefully realize that to a large extent he is where he wanted to be.

The other side of it is that my partner, Terry Greenlaw, and I wanted to help put Ron’s name out. Within the industry and within a certain demographic Ron has a very large and faithful following, but there’s a huge world out there that should know about Ron. We were hoping that this film would address that. 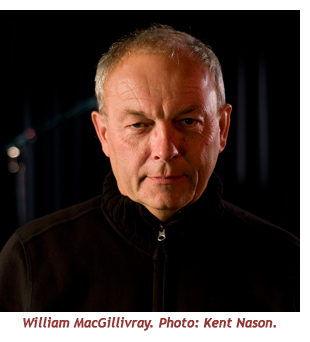 Ron was easier to work with than I would be. He was amazing. In that black box section of the film where he was basically being interrogated, he gave himself over to that . . . we shot it over an intensive three-day period of long days, hard questions, and lots of moments of leaning back and reconsidering what had been said and how far and deep we wanted to go. Ron gave fully of himself and I think one thing I came away from this project with was a sense that this is a very brave soul?he’s doing what most of us would never dare to.

He does that also when he performs his songs. His songs are soul-baring. And I think he has that ability, maybe even need, to express himself fully and in a raw, open way, as he does in the film.

When we set out to make the film, we had sort of an idea of what we wanted the film to be. But at one point we were doing what we called a pre-interview with Ron, sitting in a friend’s office with a little tape recorder going, just asking him questions. Ron was relaxed at the beginning, but as the day wore on he started to get edgy and fidgety, and he stood up and started walking back and forth and directing his answers to the tape recorder.

It suddenly dawned on us that this was the way the film should be; in order to be effective it had to be almost like an interrogation?he had to confront the camera?and not like your standard talking heads documentary.

That was a great day, the day when it all broke wide open. Terry and I looked at each other and said, Okay, here’s the film, here’s the core of the film, the thing that will make it more than just ?The Life and Times of Ron Hynes.?

?The Man? [in the movie, Ron’s alter ego] is more about the performance aspect of Ron than about the real Ron. For most of the filming, Ron was an incredibly open, giving, friendly person that anybody would love to be around. He was funny, he was engaging, and tempers never flared. ?The Man? is kind of an inner creature. Maybe It’s different now than it was during his problem era, but ?The Man? now is pretty much in another little box. 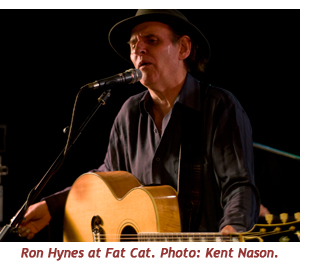 As Ron says himself, it is in a way a constant battle. I think anybody who’s married their life with their life’s work goes through this process. If you can go to your nine-to-five job and then leave your job behind when you come home and do other things, I think you may stand a better chance of sitting comfortably within your own skin, as Joel [in the film, Ron’s novelist nephew Joel Thomas Hynes] would put it. But if your life and your life’s work are one and the same, you never really get to escape yourself.

You can’t always be on. And because You’re so involved with the work that You’re doing, It’s very easy to lose sight of, as Joel puts it, ?the loved ones who surround you.? And sometimes it doesn’t go the way one would like it to go.

One of the things we tried to do with the film was to weave the music in throughout his life so that hopefully the audience can see what Ron lived through, made different, improved upon, and questioned through his music. And once again it keeps going back to the same thing: he never really does escape himself.

The Mindful Bard – The Man of a Thousand Songs