Film: The Man of a Thousand Songs

The Dark Man, the Light Man, and the Man of a Thousand Songs

?I think this film is about Ron’s light side and his dark side. I think the light side is Ron, and the dark side is that guy he’s gotta go out and be every time he shows up on a stage somewhere, or the guy that kind of took over his life. I think Ron invented this guy and he kind of came to life. Do you think this is what It’s about? What do you think It’s about?? 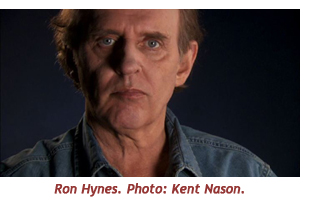 Ron Hynes, in The Man of a Thousand Songs

What is it about seaports? From Portuguese fado to Greek rebetika to Argentinian Tango, the songs generated there are swollen with nostalgia, sadness, remorse, and regret, manifesting an agonizing rehashing of the personal tragedies of the past and a longing for lost sweetness.

The music that has emerged from St. John’s, Newfoundland, is a case in point, and the Ron Hynes songbook represents one of the finest moments in the town’s musical history. Ron is no stranger to angst and despair; in his still close-up shots you can detect the same kind of tortured facial asymmetry seen in photographs of Edgar Allan Poe, a kind of twistedness symptomatic of unfathomable emotional distress.

In addition to charting the rough waters of Ron’s life story, director MacGillivray has created an enchanting cinematographic portrayal of Newfoundland. Bays; inlets; bleak, mountainous islands couched in a sapphire sea; that strange thing that happens to the light as it sifts through morning mist to land on the rocky cliffs and shorelines; the shuffled spectrum of bright folk art hues on the houses of St. John’s; and the range of speaking accents from refined to quaint to incomprehensible?the film is an aural-visual feast with an intellectual depth and artfulness that bear up beautifully under repeated viewings. 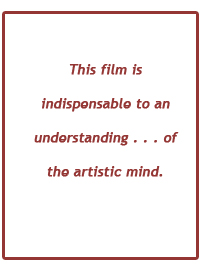 Many little gems are scattered about. In one ?black box? scene, for example, Ron is rubbing his hands together like sandpaper, symbolizing the friction in his soul as he asks, half-joking, ?Shall we dig deeper?? Ron’s ubiquitous companion is an incongruous little miniature terrier who follows Ron’s every move and is often seen sending questioning glances around the room to punctuate Ron’s soul-searching.

The contradictions of Ron Hynes’s psyche are salient; in one part of film, he decries the presence he refers to as ?The Man? for trying to take over his life in order to kill him. In a later scene, though, Ron says that he refuses to apologize for his big ego, seeing it as necessary to the task of the performing artist. 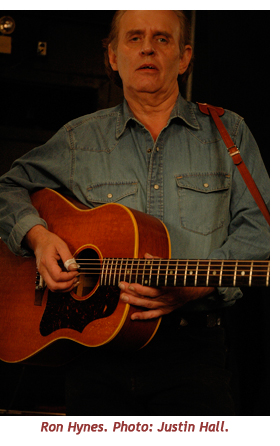 Some remarkable insights are granted by Ron’s novelist nephew Joel Thomas Hynes, who lived with Ron when he was younger. Today Joel has a complex relationship with Ron based on a combination of pride, common suffering, and a resentment stemming from a sense of having been emotionally abandoned while Ron pursued his career. At times, when Joel is talking about Ron’s dark side (his take differs somewhat from Ron?s), you get the feeling that he’s actually talking about himself.

The film includes some telling explorations of the intoxicating experience of creative expression. There is a segment in which Ron describes what It’s like to write a song that is so real and present and universal that you feel like you’ve heard it before and plagiarized it.

This reminded me of a radio interview I heard with Ron several years ago, in which he disclosed that in rehab he had not been allowed to write; it had been surmised that songwriting, or perhaps the intoxicating effect of songwriting, was part of his addictive cycle. He wrote anyway.

This film is indispensable to an understanding of the peculiar strengths and vulnerabilities of the artistic mind.

The Man of a Thousand Songs manifests five of The Mindful Bard’s criteria for films well worth seeing: 1) it poses and admirably responds to questions having a direct bearing on my view of existence; 2) it is about attainment of the true self; 3) it inspires an awareness of the sanctity of creation; 4) it displays an engagement with and compassionate response to suffering; and 5) it makes me want to be a better artist.

In Conversation With . . . William MacGillivray