Articles
The Voice
In Conversation With . . . Kilmore Place

Kilmore Place is a Vancouver indie-folk band that has shared the stage with The Dudes, Hey Ocean!, and Hedley. The musicians are Ryan Bacchus (vocals, guitar), Bryce Wagner (keyboard/piano), Greg England (guitar), Marcus Abramzik (bass), and Eisa Godoussey (drums). They spent the summer touring their second EP (extended play), …What Happened?, across the country. Recently, band member Ryan Bacchus took the time to talk with Wanda Waterman St. Louis about life, songwriting, and the sanity-producing power of simple pleasures.

I grew up in a rural area of Langley, not far from Vancouver city. Our house was perched on a hill and had an amazing view. I have no brothers, but was neighbour to a family of six children, five of them boys. We built an eight-story tree fort on the side of the hill. Their father was a lumber broker, so we had an endless supply of wood. In the summers we would live there, bring our girlfriends there, drink, and play music there. If I had a time machine, That’s where I’d go.

A Need For Cheeriness

I need to be cheery. Many writers tell me their best work follows a tragedy, but I find I usually write best when I’m in a chipper mood, even if It’s tragedy I’m writing about. I often write in the middle of the night as well, so solitary confinement is key to not disturbing a landlord, roommate, girlfriend, etc.

Writing gives you way too much information about yourself, things you didn’t even want to know. I think that in pursuing something creative like music, you become very in tune with how people react to things, what works where and what doesn’t, and how people respond. The challenge is to not let that influence . . . override your creative decisions, which is probably why so many bands and artists flop on their sophomore efforts.

I like to let the music write the words. Music first, words second. At first the lyrics are all gibberish and scat, and they might stay like that for hours. Eventually, the scat turns into lyrics, and hopefully the lyrics turn into some meaning. If I’m lucky, the words keep coming and a song is born. For every ten songs started, I probably finish one. It’s my filtering process. I figure if it didn’t get finished, the inspiration just wasn’t there and it wasn’t meant to be.

All of our songs come from life experiences. I like to be poetic at times, stream of conscious[ness] at other times. Many songs off of …What Happened? deal with the theme of growing up and the changes that go along with that. When You’re older, everything seems smaller, less precious. When You’re young, you don’t notice little things like if You’re hot or cold, tired or hungry, what time it is. Summer lasted forever when I was 10. A lot of the new songs play to those themes in some way. 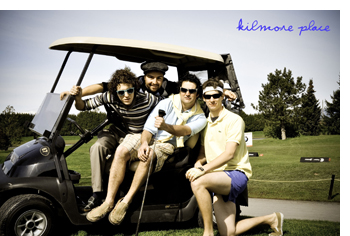 A utilitarian philosophy is as close as I get to a religious code. Organized religion baffles me; so many people are so sure about their religion, yet there are so many different varieties, all claiming proprietary validity. Seems like a bold choice, but maybe That’s what I don’t understand about faith.

The Push Toward Sanity

It’s my social conscience that led me to being a musician. Playing and performing is something I love and feel I’m good at, and hence is the best way I can bring people together and make them happy. I think that being a musician, you can see how simple we all are, you see how easily we forget that It’s usually the simple pleasures in life that make the biggest push toward . . . our own sanity. We get caught up in our jobs and responsibilities when all we really want is a drink, some company, and a good conversation.