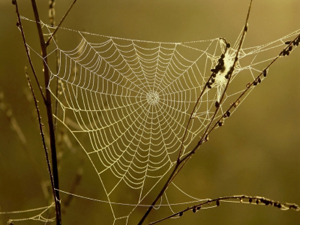 It’s October 1, and for many, that means It’s time to break out the Halloween decorations: pumpkins, scarecrows, and, of course, the fake spiderwebs made from cotton batting. But squeamishness about spiders aside, real spiderwebs are nothing short of amazing. This week’s links look at webs that put Charlotte’s to shame (almost!).

The old adage ?If you build a better mousetrap . . .? takes on a new meaning in the jungles of Madagascar. There, the Darwin’s bark spider, a Madagascar species only recently studied by scientists, builds webs that may reach a mind-boggling 25 meters wide?and uses the giant structures to catch dragonflies and other small insects. This National Geographic pictorial shows the incredible photos.

Scientists have long noticed that some spiders weave unusual, even decorative patterns in among the traditional web strands. But a few years ago, a University of Sydney study suggested that the designs may have a purpose: to reflect ultraviolet rays in order to mimic typical food sources for flies and other prey. This article has the fascinating details.

Spider silk, the material from which spiderwebs are made, is a much-studied substance?its strength and elasticity make it of interest for surgery, bulletproof vests, and more. But farming spiders to create the silk isn’t successful, due to spiders? aggressive tendencies. Instead, scientists have been experimenting with the silk protein gene, injecting it into goats, which will then produce milk containing the protein. The National Science Foundation has the video story.

The Secret to Happiness