?. . . Binobin . . . have at last found a musical elsewhere where they don’t have to choose between their multiple cultures. Where bendirs and karkabous have no need for visas to jam with guitars and saxophones.?

The statement above is a declaration of creative victory, the kind of triumph experienced by artists who have accepted their own ethnic identities in spite of a world that may not be able to make sense of those identities just yet.

For artists who have had any amount of vocational success, there is often a leap to be made between the stream in which they were spawned and the more oceanic arts world. Exiles are keenly aware of this, but so are those who must move back and forth between the two worlds. Robert Burns was perpetually torn between the rugged Scottish countryside and the salons of London, never feeling one hundred per cent content in either.

This sense of not quite fitting in either of two worlds is summed up by the name of ?Binobin,? a France-based Moroccan group whose Arabic name means ?the space in between? (or alternatively, ?not quite complete?). It’s a metaphor which sparks allusions to the experiences of not only artists, but also of outsiders of every variety. 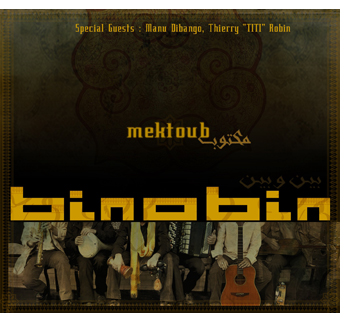 The group’s Moroccan roots show in the Gnawa rhythms as well as in the instrumentation?the 10 band members play taarija, darbouka, bendir, karkabous, and tbilat, and do rhythmic hand-clapping (which in Morocco has musical instrument status in itself) in addition to accordion, guitar, and tenor sax. But the group also pays loving tribute to musical genres and categories the whole world has welcomed, including reggae, Latin, klezmer, gypsy jazz, sub-Saharan African, and West Indian music.

Binobin has had a tremendous amount of experience playing live, and every track is an engaging party tune. A first listen to almost any track on this album will crack you up?the Zappaesque hoots, shouts, crazy beats, and other anomalous noises make you feel like You’re in a busy market in Marrakesh or listening to a rhythm band for hyperactive children.

But the song lyrics cast a longing eye back to simple, peaceful village life and suggest the anxieties and humiliations that await the immigrant. The title track, ?Mektoub? (meaning ?destiny? in Arabic), announces a purely fatalistic view of life. 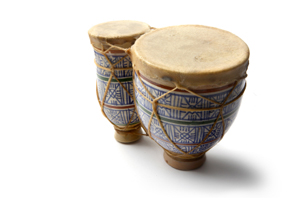 The lyrics on Mektoub convey the sense of loss of identity that comes from feeling stuck between two worlds and not really a part of either one, stretched between home and adventure, between the regional and the international, between the community and the solitary life of the artist who is very aware of his or her integral uniqueness.

This review would not have been complete without the help of Taha Rhili of Redeyef, Tunisia.