Allan and Sandra Jaffe founded Preservation Hall in 1961 to provide a performance space for New Orleans jazz musicians. The Preservation Hall organization, now directed by their son Ben Jaffe, evolved into a significant means of protecting and nurturing the hallowed but living tradition of New Orleans jazz. They employ several creative ways of achieving this, including sponsoring an in-house band and providing musical education to the young by means of their musical outreach program.

Amid all the quaintness that many associate with Dixieland music, It’s easy to forget that today’s musicians and composers owe a massive debt to New Orleans and hold a huge stake in the continuation of its musical tradition.

It’s a motley crew here, but every singer on this album loves New Orleans. These amazing artists donated their time to this album to raise money for the Hall and the outreach program. The recording was done in the Hall itself, accompanied by the Preservation Hall Jazz Band, on a set of classic Dixieland tunes. The Preservation Hall Jazz Band (composed of musicians who are all amazing artists themselves) has a long-standing reputation for brilliant playing, true to the genre yet bursting with vitality.

What’s especially remarkable is that these performers remain so true to tradition while still allowing their personal styles to shine; in fact, it sometimes seems that, couched in the band’s buoyant call and response, the individual musical styles are especially salient. 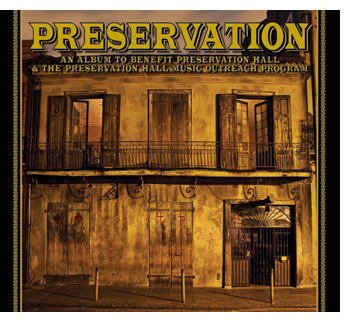 How, for example can Tom Waits sing ?Tootie Ma is a Big Fine Thing? and make it sound exactly like something he would have written himself? (Incidentally, the Hall has ingeniously released this as a 78 record, pretty apt when you consider that this is one of the first Mardi Gras songs ever recorded, in 1955 by Danny Barker and his Creole Cats, on 78 vinyl.)

This resonance would suggest that every one of these performers owes a heap of thanks to the sub-genre we call New Orleans jazz, which, in its structure as well as its sense of triumph in adversity, has had a great influence on American?and world?music.

Big kudos all around to Ben Jaffe and his cohorts at the Hall for putting this album together. This kind of endeavour gives New Orleans tradition a firm enough footing to keep it parading the globe indefinitely.

Preservation manifests six of The Mindful Bard’s criteria for music well worth a listen: 1) it is authentic, original, and delightful; 2) it makes me want to be a better artist; 3) it gives me tools that aid my art; 4) it is about attainment of the true self; 5) it provides respite from a sick and cruel world, a respite enabling me to renew myself for a return to mindful artistic endeavour; and 6) it harmoniously unites art with social action, saving me from both seclusion in an ivory tower and slavery to someone else’s political agenda.

Preservation was recommended to The Mindful Bard by Josh Peck of Bear River, Nova Scotia.