Taha Adnan is a Moroccan who’s made Brussels his base camp for a number of years, and his work reflects a preoccupation with defining his personal vision against a conventional romanticizing of the poet in exile.

In these poems, the immigrant and the poet are brothers in the struggle for new identities that always seems to be couched in terms that neither can honestly accept. Meanwhile, both experience a manic swinging between a sense of inferiority That’s easily exploited and a grandiose supremacy That’s easily embittered. 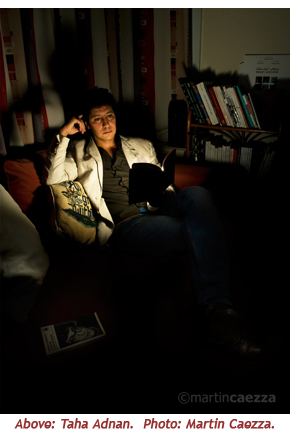 In true postmodern form, Adnan suggests that exile should not be defined as the simple state of residing outside one’s homeland, but rather in the marginalization created by classism, racism, sexism, and poverty. In this sense, the globe is covered with people who may or may not have been displaced from their homes yet who are all living in exile, pushed to the edges by the fortunately situated, and often compelled to deny origins (hence the self) in order to escape this marginalization.

Within Adnan’s imaginative landscape the poem itself is a living, breathing character: a challenging foe, a taunting bully, an alluring siren, a shrill taskmaster shaming the poet and causing him to doubt his own vocation, a raucous playmate who calls him away from the mundane, a harsh disciplinarian who forces him to accept it, a delicate elixir at the mercy of the faulty vessels that carry it (whether hard disk or paper), and a jealous wife screaming for his full attention.

The poet is here seen as a kind of prophet on a cyberspace mountain, who perceives the current reality, places it in the balance, and for all its bells and whistles finds it wanting. At the same time, the poet also ushers in the future, in this case by compelling the reader to recognize?and recoil from?that reality.

Je Hais l?Amour is a brilliant example of how the primitive, magical voice remains relevant?and resonant?in the postmodern vale of tears.

In Conversation – With Marc Vella