?The insane, on occasion, are not without their charms.? 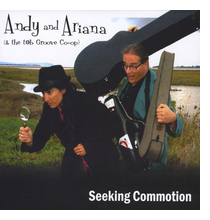 My two favorite mad geniuses (formerly known as T@b; read the Voice interview with singer Andy Flinn here) have done it again, putting out one more song set That’s so deliciously good it keeps their feet steady on that uphill creative trajectory.

The lyrics of ?Sakini Maikhana? (a brilliantly poetic meditation on illusory freedom) were written by Ariana’s dad, Amin, in Dari, an Afghan dialect of Persian. The rest of the songs were penned mostly by Andy, and the arrangements, served up by a group of superlatively inventive musicians, are a great mix of more genres and styles than you can shake a bow at (including Celtic, folk, bluegrass, country, gypsy jazz, ragtime, calypso, and Middle Eastern), layered over Andy and Ariana’s unique brand of polyrhythmic jazz.

This is an exuberant album: intelligent but lively, and socially conscious but without taking itself too seriously.

The first few bars into Cybiont’s music, and You’re hit with the realness of it; It’s so authentic it practically lactates, which is one reason why Gregor recommended Cybiont’s last album, Angels & Demons, back in July. This new CD is no slouch either, delivering all the evocative thrills and twists and turns of altered consciousness you can achieve this side of dropping acid.

In the lyrics you can really hear the influence of French thinker Joël de Rosnay, whose philosophy is basically an optimistic one: he asserts that the next evolutionary step is the formation of a giant brain made out of?well, practically everything. And even if you think the theory is cracked, you have to admit it presents a fascinating realm of exploration, especially if the belief is as sincere as Cybiont’s and the landscape is described as invitingly.

The instrumentation as well as the bits and pieces are highly eclectic, but Cybiont doesn’t throw the whole pantry into the pot and call himself a chef; every element is chosen with care and with a sharp intuition of what will work. His art is as integrated as his philosophy.

Such optimism is delightfully incongruous in music whose general tone recalls the darker, danker elements of Nick Cave, The Cure, and the Velvet Underground. 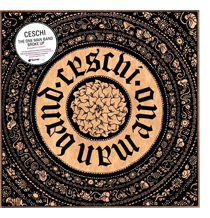 It has often been said that irony appears when cultures are in decline, and if The One Man Band Broke Up is any indication, hip hop?as a genre that can continue to vivify and influence the course of pop culture?is now finally sliding down an inclined plane. The slide is a spectacular one.

It’s easy to take this album seriously; It’s so carefully put together, so true to the genre, and so creative. At the same time, it all seems like an artfully constructed satire.

There’s a rich mulligatawny here: a Tom Waits sampling, hip hop words coming so fast they sound like staccato triplets, a tea kettle whistling, someone sneezing, vacuous inter-track patter between band and producer, some folksy white boy sentimental acoustic strums and crooning, and a host of other special little touches that make this one a repeater.

With conspicuously literary lyrics paired off with gutter language and an anthemic title track That’s hilariously funny?and disgustingly graphic?about the seediness of the hip hop entertainer’s life, It’s guaranteed to leave you either with your mouth hanging open or clutching your sides with laughter.