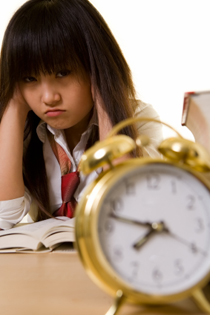 December’s begun. This time of year, we’re all pulled so many ways: shopping, work, Christmas parties, events at the kids? schools, volunteering, and the need to make the holidays more spiritual than stressful are all clamouring for our attention. And on top of our ever-lengthening holiday to-do lists, many of us have final exams and important course papers and projects added to the mix.

It’s hard to get that Christmas feeling when we’re faced with the harsh reality of looming deadlines and the finality of that letter grade. But exam stress doesn’t need to overtake the season!

The web is home to an infinite number of exam study aids, tips, and suggestions. we’re told how to organize our time, how to review course materials for maximum retention, and how to manage exam day?and exam room?stress. we’re also given techniques for diffusing stress, and encouraged to carve out time for relaxation even in the midst of the busiest study days.

But one thing that most advice neglects? The necessity of knowing yourself. And if you think that sounds counterproductive, or that It’s some time-wasting psychoanalytical exercise That’s a poor stand-in for good, old-fashioned studying, you might reconsider. 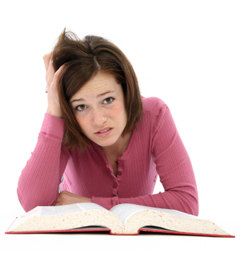 After all, exam stress doesn’t come from the course material itself. It’s not even caused by poor study skills?in and of themselves. It comes from the student and how she approaches her courses and finals, especially in the context of the larger picture.

If we don’t figure out our own student weaknesses, we won’t uncover the underlying reasons why we panic before finals. And as a result, those ?tried-and-true? stress reduction techniques won’t solve our crunch time dilemmas, since they won’t necessarily be geared to how we work. But with a little more self-knowledge, we can avoid our inclinations toward the attitudes and behaviours that result in pre-exam panic.

The Health Centre at the UK’s Imperial College approaches this self-knowledge by dividing stressed students into three categories: perfectionists, tense or fearful students, and self-indulgent students. Learning your particular stress-causing weakness gives you the knowledge you need to battle the source of pre-exam jitters right at its roots. 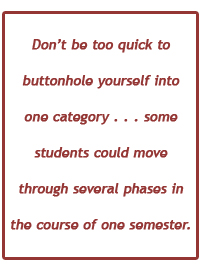 For example, perfectionism might be seen as a good thing, but It’s incredibly crippling?particularly when crunch time rolls around. According to the Centre, two facets of perfectionism are workaholic tendencies and procrastination. In my experience, the two often go hand-in-hand; the task of doing it all perfectly is pretty daunting, and putting it off until later seems the only physically possible coping mechanism. This makes perfect performance even less likely, and stress mounts. Students struggling with perfectionism can learn to combat it by avoiding the self-defeating ?must? and ?should? attitudes that hamper their ability to move forward with confidence. And by focusing on the bigger picture, these students can avoid getting bogged down in the minutiae.

On the opposite end of the spectrum are the tense and fearful students, whose self-confidence is low. The Centre notes several forms of negative self-talk in which these students engage: overgeneralization and exaggeration, for example. Particularly interesting is their inclusion of emotional reasoning, which they define as ?confusing thinking with feeling.? For instance, a student might feel incompetent in biology; It’s then a small step to assuming he actually is incompetent in biology. How many of us are guilty of that? These students can fight the negativity and defeatist thoughts by using positive self-counselling and role playing techniques. Additionally, they can reduce each task to its components in order to remove much of the impetus for fear.

Then there are the so-called self-indulgent students, who find it difficult to get motivated and focus on studying. But rather than giving the usual advice to essentially suck it up and get to work, the Centre recommends working with, rather than against, these tendencies. For example, instead of focusing on the need to put in long periods of intense study (who wants to do that?), students struggling with these attitudes can limit themselves to 30-minute sessions, with a reward at the end of each. Getting successfully through several short study periods removes much of the pain of studying?and accomplishes review work at the same time. 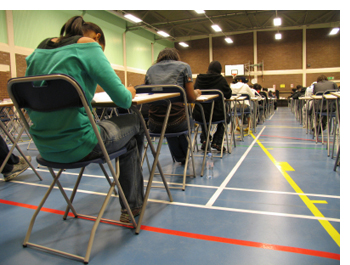 don’t be too quick to buttonhole yourself into one category; as the Centre points out, many students pass through two or three of the categories during the course of their academic career. Conceivably, some students could move through several phases in the course of one semester, depending upon the subject matter. For example, a student whose tendencies are usually toward perfectionism might move through the tense and fearful phase when one course is in an area in which she feels particularly unsure. And a normally perfectionist or fearful student might lack motivation due to burnout from other life stresses, turning him toward the self-indulgent phase.

No tips or techniques on their own will result in that coveted grade. But by understanding a little better where we’re coming from as students, we can engage in practices that will overcome our own tendencies to defeat our best efforts. With these as ammunition, we can face the tense exam period with just a little more confidence?and a little less stress.