Columns
The Voice
From Where I Sit – Countdown to Reveal

I’ve watched my share of reality shows, particularly the home renovation or home redecoration kind. The faux drama of the countdown to ?reveal??the return of the homeowners, start of the open house, or winning of some competition?always feels contrived. It feels like manipulation and a stretch for the more cynical among us. Who are they trying to kid? We know the episode takes place over days, weeks, or even months, not neat little 30 or 60-minute parcels of TV time. We know there are stylists, photographers, producers, directors, interns, painters, carpenters, hosts, tradespeople, and assistants, plus the couples, families, or rivals taking part in the episode.

The conflict and cliffhanger moments build to hook us with the sheer suspense of it all. Will the supplier come through with the granite countertop? Will the group of neophytes finish painting the house? Will the reaction of potential buyers?to be caught on secret camera?be favourable? Has the project stayed on budget?

Well, kids, gather around to hear my story. I believe the drama. I’ve felt the pressure.

This past weekend, Roy and I helped our daughter and her business partner decorate for a large Christmas party at a conference facility. Nearly a year ago, the committee requested a Mardi Gras theme. My first reaction was That’s just crazy, but hey, I’m just the hired help, so what do I know? As I researched the theme, though, I got hooked on the idea. As always, there were several, sometimes opposing, factors: meet the client’s expectations within budget, make sure the guests have a great time, ensure the overall concept is creative and unique, deliver what you’ve promised. On time.

When decorating a cavernous room?think 25-foot ceilings and several thousand square feet of area?scale and lighting are critical. A King and Queen of the Mardi Gras area that featured two ?thrones? and costume props would be a huge hit. Back by popular demand, open picture frames suspended from the ceiling would create another photo op area.

The client requested a street scene backdrop. So Friday morning, Cecilia and I began painting a 12-foot-high by 18-foot-wide fabric panel that I had sewn together at home weeks ago. We painted and painted?brick facade, double doors, shuttered windows, balcony railings, hanging flowerpots. By Saturday noon, it was ready to hang. But wait, there’s more. We all pitched in to lay out 700 place settings, including a feather mask on a stick and three strands of beads at each one. We created 88 centrepieces on site and scattered 1600 coins. In total, we untangled and handled 3500 strands of beads. On the stage and elsewhere, we created magic with yards of fabric panels, cello, tulle, an eight-foot mask, and dozens of hanging fleur- de-lys. Glitter and shine in gold, green, and purple. 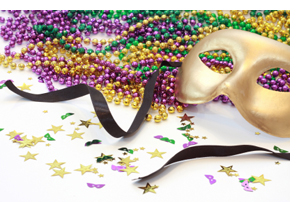 When things looked especially bad?about three hours before the ?reveal??we called in reinforcements. Greg and Carrie helped save the day. Fifteen-month-old Grady did his part by being an angel and letting his parents work. A custodian was still mopping up our mess at the back of the ballroom as guests were arriving at the front. The pressure to produce was intense. The adrenalin rush was fierce. But the relief was immense, and the pride at a job well done was huge.

Post-event feedback was gratifying. Our decorating, the jesters and mimes we hired, and a Dixie band helped create the ambience and excitement this event demanded. But I could have done without the cliffhanger, from where I sit.