Articles
The Voice
In Conversation With . . . Meklit Hadero, Part II

Meklit Hadero is an Ethiopian-born, Yale-educated, San Francisco-based singer-songwriter whose style merges jazz with folk and world music to create deeply sympathetic portraits of life’s magical (and often unnoticed) details. Her first full-length CD, On a Day Like This… , has just been released by Porto Franco Records. Meklit recently took the time to chat with Wanda Waterman St. Louis about getting inspired to write songs. (Check out the first part of this interview here.)

How to Write a Song

Breakups are good for songwriting, and so is being in love and so is poetry. When I’m writing, I almost have blinders over my eyes. The things that make you look at the world from straight-on are the things that help you adapt to functioning logistically in the world. It’s a big part of how we have to function. But when you open that wider, you see that everything is magical, even the smallest things. Anything can be a song.

I really like it here in San Francisco. I like going to New York regularly and I like kind of popping in and out. In New York the creative pulse is like a river?there’s nothing trickling about it. But here you have more space to reflect, which is good for incubation. New York is good for output.

On ?Walk Up? (based on Three Gems by James Turrell, at the de Young Museum) 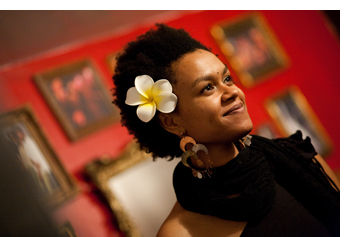 I spent a residency at the de Young, which meant I spent all day, every day, writing songs there. It was a wonderful period of expansion. I would arrive there at one o?clock, put down my things, and head to Three Gems. I’d sing in there, watch people. I spent time in there because I loved it.

It’s a big room, mostly made of cement, open to the sky, with great acoustics, and the sky becomes this presence inside the space. I’m not sure how he does it?the whole is more than the sum of its parts?but the sky is with you in there and you watch it; you watch the fog and the clouds and the birds.

It was very predictable, what would happen to people after a while. When they were in Three Gems they would expand. It was so beautiful. You would watch them removing the buzzing distraction of what was going on, and they would just rise.

In Conversation With . . . Meklit Hadero, Part I