Columns
The Voice
The Mindful Bard – In A Strange Room

The Self as a Ubiquitous Geography

? . . . movement has always been a substitute for thought and he’d like to stop thinking now.?

Damon Galgut, In a Strange Room

Our nameless white South African protagonist is making his way from Malawi to Tanzania with some travellers he’s met along the way. His anxiety builds as they approach the border and, sure enough, his companions (two Swiss, one French, and one Chilean) are admitted without visas while he is barred.

Throughout this strangely beautiful tale, the hero wrestles with his South African-ness. It often appears to be his mark of Cain, the thing that has exiled him; he has been permanently displaced by world opinion and by his personal reaction to his national identity. He’s terrified of going home and just as fearful of what might happen to him in the world at large.

He’s being ferried across a lake in Malawi and sleeping under a magnificent canopy of stars when he notices a massive hook dangling above him, the kind used for lifting crates. He obsesses over this hook off and on during a fitful sleep: ?The night is starry and huge, despite this one concentration of dread at the very centre of it, above him.?

He projects his own fear, revulsion, and loneliness onto his companions and thereby ends up hating a few of them while at the same time experiencing a profound longing for intimacy.

The rhythm of the prose is a gentle intoxicant, lulling the reader into a calm space from which to watch the events unfold (in spite of the fact that many of the scenes are full of noise and fury). The absence of quotation marks adds to the serene dignity of tone. And Galgut’s metaphors are exquisite.

Plus he has something to say about metaphors themselves. At the aforementioned border crossing, he muses, ?Everything at times takes on a symbolic weight and power. But this too is why he travels. The world You’re moving through flows into another one inside, nothing stays divided any more . . .The border is a line on a map, but also drawn inside himself somewhere.? 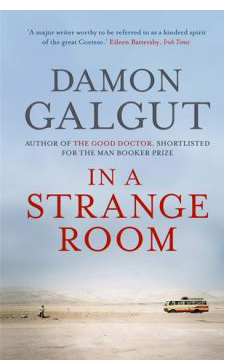 As in Dostoevsky’s more memorable passages, you realize with a shock that you’ve been here; the names and places have changed, but you’ve lived it. The familiarity is jarring.

Galgut’s hero is a personification of human fragility, of our (largely unconscious) dependence on place, our sense of disconnection and alienation once we are uprooted, and the cycles of searching that this alienation engenders.

One device the author uses to illustrate the sense of rootlessness is a frequent (and often unexpected) switching back and forth between first and third person. One moment our hero is couched happily in his own skin, and the next (most often when overcome by pain or discomfort), he’s out of his body, observing himself with an (almost) objective detachment.

Eventually he names himself?with the author’s first name?at a moment when he is attempting to reconnect with his ethnic roots. We see that the human body is itself a geographic entity?subject to contest, paternalism, disputes, and battles; loved, cherished, despised, and sometimes abandoned.

In a Strange Room manifests 11 of The Mindful Bard’s criteria for books well worth reading: 1) it is authentic, original, and delightful; 2) it confronts, rebukes, or mocks existing injustices; 3) it gives me tools enabling me to respond with compassion and efficacy to the suffering around me; 4) it makes me want to be a better artist; 5) it gives me tools which help me be a better artist; 6) it displays an engagement with and compassionate response to suffering; 7) it inspires an awareness of the sanctity of creation; 8) it is about attainment of the true self; 9) it provides respite from a sick and cruel world, a respite enabling me to renew myself for a return to mindful artistic endeavour; 10) it stimulates my mind; and 11) it poses and admirably responds to questions which have a direct bearing on my view of existence.

In Conversation – A Syrian Kurd